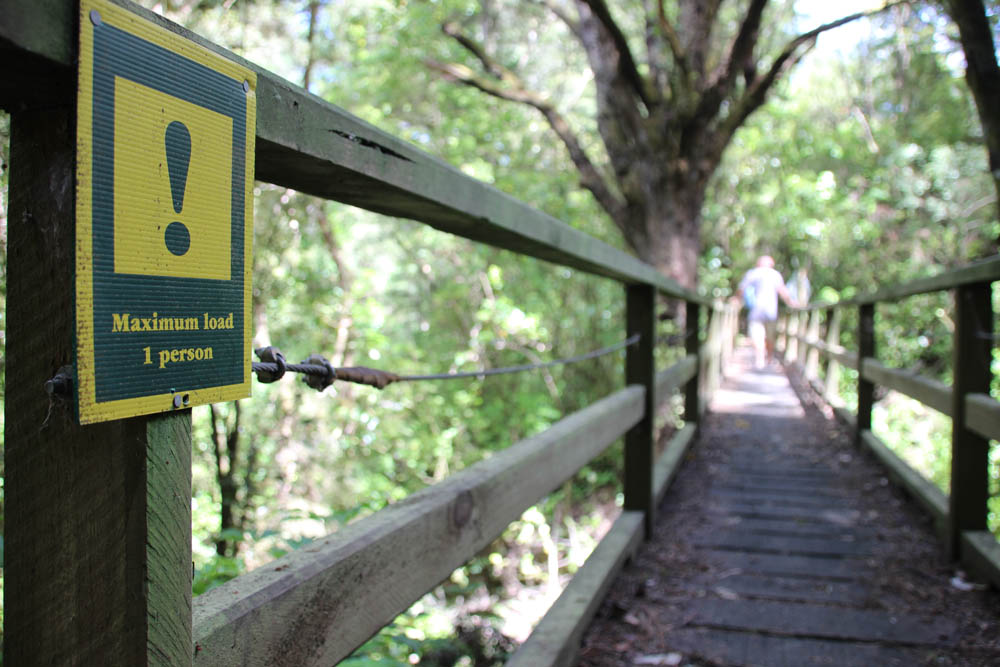 We had been to Monckton Reserve before…it’s where we saw the cute Morepork owl on our way out. I always hope we’ll see it again but today was not the day. However, a familiar face lately did show up!

This reserve, located about 20 minutes from home, was donated by Mr. Monckton in 1975 and consists of 16.5ha (a bit over 40 acres). It’s a good mix of steep climbs, somewhat narrow and treacherous trails and a long, high bridge that only supports one person at a time. There are plenty of birds, trees and a shallow stream. There used to be a bridge crossing over the stream which starts the walk but it’s been taken out by a flood, I believe. We’ve always just had to cross through the stream and in winter, it’s not too fun. Today, going in, the water was cold. But for some reason, on the way out, it wasn’t too bad!

I did notice the huge tree that seemed to be hanging on by a thread over the stream…just a matter of time.

What I like about this walk is that it’s unpredictable. You never really know what you’ll see and the variety of trees and plants (there are a ton of different ferns) make it interesting. I was noticing a lot of pointy leafed plants here which seemed odd.

There were two plants near each other; one with a spade shape and one with a heart shape. I wondered if the animals sat around playing cards with them at night. I didn’t notice the really pointy plant had some wicked looking spines on it until I processed the photo. Glad I didn’t try to touch it!

Then their opposites stood out as well. These cute little oval leaves caught my eye. And look, some club leaves…all we need are some diamonds and the poker game is on!

The leaves with noticeable veins seemed a bit creepy, like the back of a person’s wrist, coursing with blood.

Lots of texture in the tree trunks as well.

I went off the beaten path to see the stream and almost ran into a nasty stalk with thorns. Had to be blackberry or the like but there were no fruits on them.

Only steps away from the thorny plants stood one delicate foxglove.

And what do you know, some magic mushroom sitting right along the path. Figures.

It was fairly quiet in the forest, except for the occasional bird calling. I could hear Tui’s more often than I could see them and one flew right by my head which scared me. Their wings sound like an old red checkered tablecloth being shaken off after a picnic.

I like vines…they remind me of the jungle. Tenacious as weeds, using all of their strength to climb higher, using anything they can to reach the light of day.

The bridge in the reserve has two warning signs about being able to hold one person only. Seemed pretty sturdy to me, but I won’t chance it.

The tree ferns here are huge. They’re very slow growing, only increasing by about an inch per year. So ones as tall as me are about 60 years old. These would have been at least 120 years old. Pretty amazing.

I love the smell of forests. I often wonder how all of the decaying and dying things can actually smell so refreshing. Getting closer to ground level, I notice all of the moss and small plants thriving. The soft ground cushioned my steps as I thought about the years of organic matter piled up below me.

As we turned a bend, the creek came into view and Andy stood there, pointing up into the tree. A fat Kereru like the ones we saw in New Plymouth! Well aware we were there.

I paused for a moment to look through the valley and noticed some big yucca up very high but couldn’t tell what they were “stuck” to!?

There was also a huge tree in full bloom. I expected to see birds all over it, but it was seemingly silent.

Spiderwebs of all types line the forests here. It’s amazing how different they all are. I often don’t like walking first because they brush up against my arms. I can tell they’re strong because they usually don’t stick to me.

This looked like fine hair with no particular pattern to it.

Whereas ones like this reminded me of a hovering wave of cigarette smoke in a still room.

A pretty purple flower losing its petals deserved a moment on the way out.

There’s a downed pine branch that I inspect each time. Today, the tightly knit pinecone reminded me of teeth or corn kernels.

The grassy parking area of the reserve has an old apple tree growing and it was full of young fruit. Some magpies talked to each other while foraging for worms in the grass.

There’s a small graveyard we pass and I wanted to stop in on the way home. Some of the people buried here were born in the early 1800’s. It’s hard to even imagine what life must have been like for them.

I looked out over the hills to the ranges, thinking it was the exact same view the people attending funerals here a hundred years ago saw, too.

A very old fence that had once contained a tree was now being pushed up and out by it. I imagined the sapling that had been planted there decades ago, now a huge pine outgrowing its enclosure.

I also stopped there to pay tribute to my best friend’s mother who recently passed in the States before Christmas. I wished I could have been there to give my support, but I was there in spirit. This hawk circled above us as we drove up.