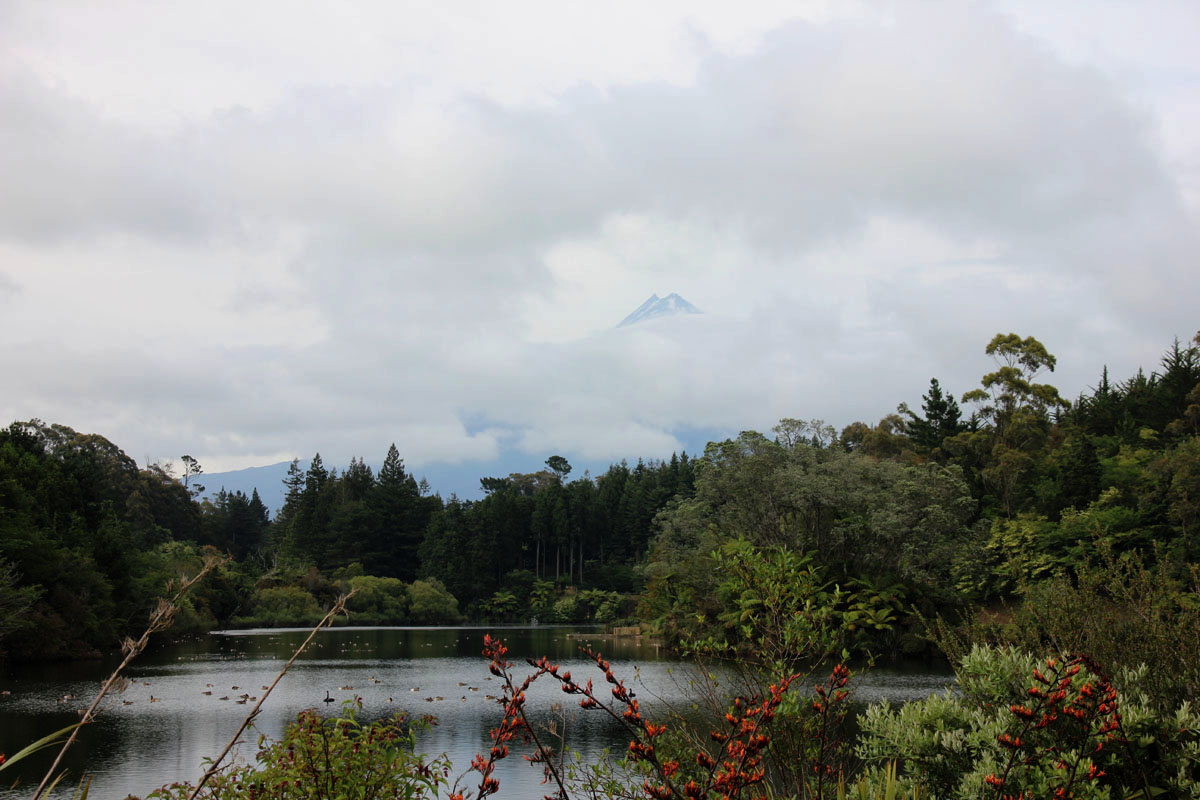 We decided at the last minute to go to New Plymouth again right before Christmas. We had been two years ago. The weather was supposed to be fine and with any luck, not many people there.

About an hour away from home, we pass through a wind farm and some seriously windy roads which is always scary (and it makes me green in the face). I happened to catch sight of a car that had crashed through the fence and went over the edge.

I guess it was lucky to have landed there. This also wasn’t one of the steeper drop offs along that road, either. Whenever I see an abandoned crashed car on the side of the road, it makes me think of when my cousin came to visit and asked if the cars were just put there for awareness. I said, “Nope, those are real wrecks!”

On the way over to the West Coast (a 4 1/2 hour drive), we stopped in Whanganui to take photos in the Durie Hill tunnel. I stumbled across this looking for things to do on the way to NP and this was a “must do” on my list.

We parked right in front of it only to find it was closed! Thankfully, we were just early by about 20 minutes as it opened at 10am. I had also seen pictures of the stairs leading up the hill so we tackled that in order to get to the top and then climb a circular staircase to see a view of the city.

The tunnel and elevator was built in the early 1900’s in order to give people an easier way of getting to the top of the hill instead of climbing those wicked steps. The elevator is still in operation (unfortunately we didn’t check it out as we were in a hurry).

I got the shots I wanted and we left the stuffy, humid tunnel for New Plymouth!

Along the way, the Pohutukawa (New Zealand ‘Christmas Trees’) were in bloom along the roads and after we settled in, headed to the coastal walkway to find even more.

The walkway goes many kilometers but we stayed in the general area and took a side path following a stream which was shady and cool. The amount of hydrangeas in this town just floored me!

The next morning, I wanted to try and get shots of the elusive Mt. Taranaki which is a dormant volcano that is absolutely gorgeous. It’s usually shrouded by clouds and this day was no exception. I found a good view but had to wait a while for the clouds to part before I could see the very top. In the meantime, I got some wildlife photos. (Click on the photos for full size.)

We then headed to Tupare gardens which was a property now run by the local council. It includes the homestead, a gardener’s quarters, acres of gorgeous gardens and a river. The hydrangeas lined the long, curvy driveway leading to it. I just got lost in those things.

We headed back to the CBD and was lucky enough to come across a good band playing for free in the same spot we had a drink the day before. We sat on some comfy beanbags and took it all in. It was a great vibe, with the ocean to our left, the sun shining and just the right amount of people around.

The next thing on the list was to visit the nice, free zoo within the park and then go to an area we missed before, which included a Fernery! Wow…the amount of plants they crammed into that place was amazing. One of the oddest things at the zoo was watching an Alpaca get shaved! The other two looked on while it was happening with one looking like it had already gotten clipped.

The meerkats seemed really worried about the helicopter which kept passing over. They didn’t miss a thing.

And on to the Fernery! It’s funny because I said when we walked in, “There has to be a kiwi in here!” Sure enough, as we left, I spotted one.

The park was pretty empty and I had to see the big Angel Trumpet trees. We also spotted TWO Kereru (wood pigeons). It’s hard to show the scale of them in these photos, but I swear they were almost as big as the turkey we had for Thanksgiving! I exaggerate slightly but you just can’t imagine these things can fly they’re so fat.

By the time the day was over, our bodies were sore from all of the walking. In one day we did 16,000 steps according to Andy’s phone. We felt every single one. But the day was not over yet! They were having a light festival at the park starting at 8:30pm which is typically our bedtime. But I couldn’t miss it and didn’t want to go in the rain, so back out we went!

Day 3 was threatening rain which is why I wanted to get as much done outside as possible while we could, so we hit up the CBD to check out the shops, visit the museum and grab some food. I’m a sucker for city wall art, so here was some near the museum. I also wanted to get more shots of the Len Lye gallery but it was not a good day for it. I love the mirror design though.

And that about ended the decent weather. Our last day it rained and it kept going until we got home. However, that final day we walked a southern stretch of the coastal walkway so I could attempt to re-create a painting I saw in a gallery. It was black and white with only the red of the pohutukawa flowers painted in color. I couldn’t quite get the same vantage point, but found a suitable one and photoshopped it accordingly.

It’s now my 6th Summer Christmas and it still doesn’t feel right. I’ll BBQ some steaks for dinner in true Kiwi fashion and have some adult beverages with friends. Here’s to hoping 2021 will bring relief from Covid and we can all travel again. Looking forward to seeing friends and family in the States and hopefully in Central America, too!

Have a great (if not lowkey) Christmas, everyone!