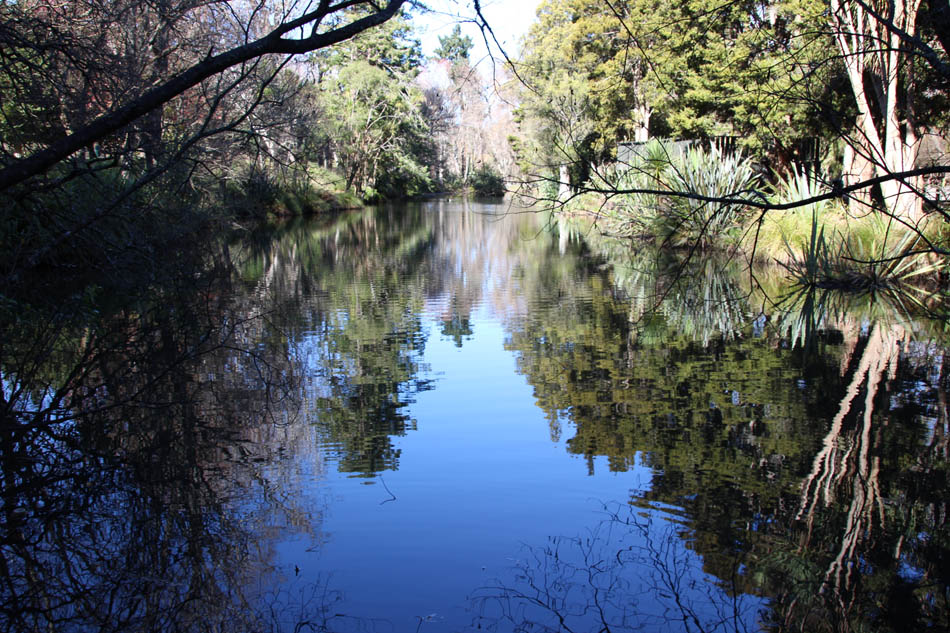 I recently started a beekeeping class and in a lead up to that, I had read about a local honey company who produces some of the highest grade manuka honey. Their website was delicious. I bought some quality honey for my mom, but it turned out New Zealand no longer lets us send honey out of the country since Covid hit. You must have a license to export ‘animal products’ and unsurprisingly, I lacked this qualification. This meant that I either keep it until I visited again or…..yep….keep it for myself. Sorry, ma. I dug in. Actually, I only had a small spoonful, all by itself, right in my mouth. It wasn’t as harsh as some I’ve tasted. It was a sweet, beautiful rich golden brown that I just wanted to bathe in. 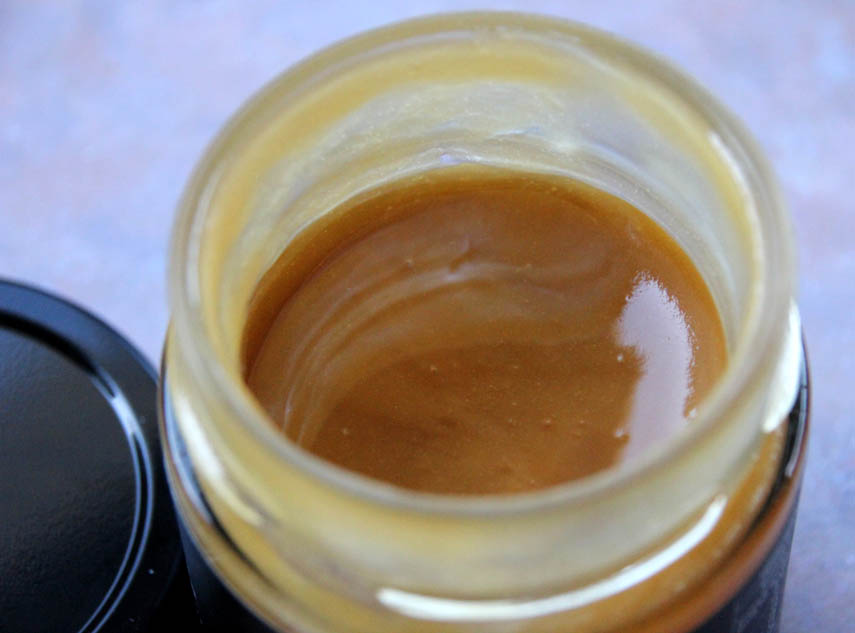 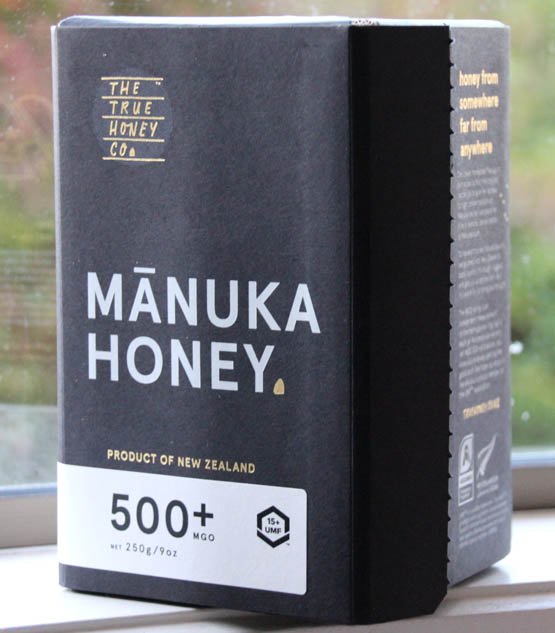 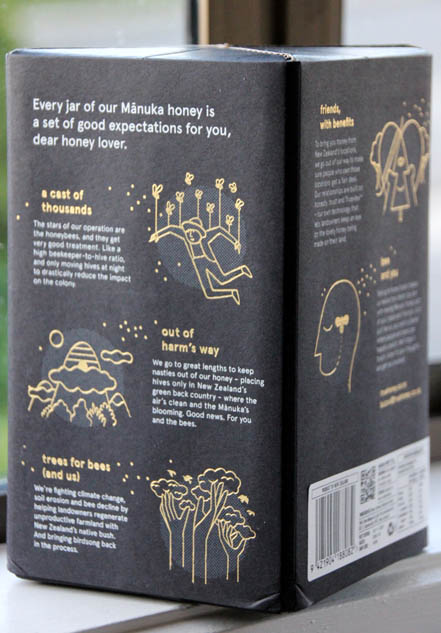 The box itself was a work of art. I’ve never seen one like it. It’s a lovely little apartment for the jar to live in; dark and cool, just the way it should be.

Anyway, the company is based out of Dannevirke. I thought about trying to get some part time work there but wanted to do the 40+ minute drive first just to see if I could deal with that. So, it’s been on my mind lately and I looked up some things to do there before heading out on this beautiful, low 60 degree, sunny day.

My neighbour dropped by right before I left and told me about a park with some old trees which I’d definitely go see. On the way though, I was going by to see the eels in Norsewood since it was on the way. I had some fish in the freezer and defrosted that before I left. There were five or so there and happily took my offering. 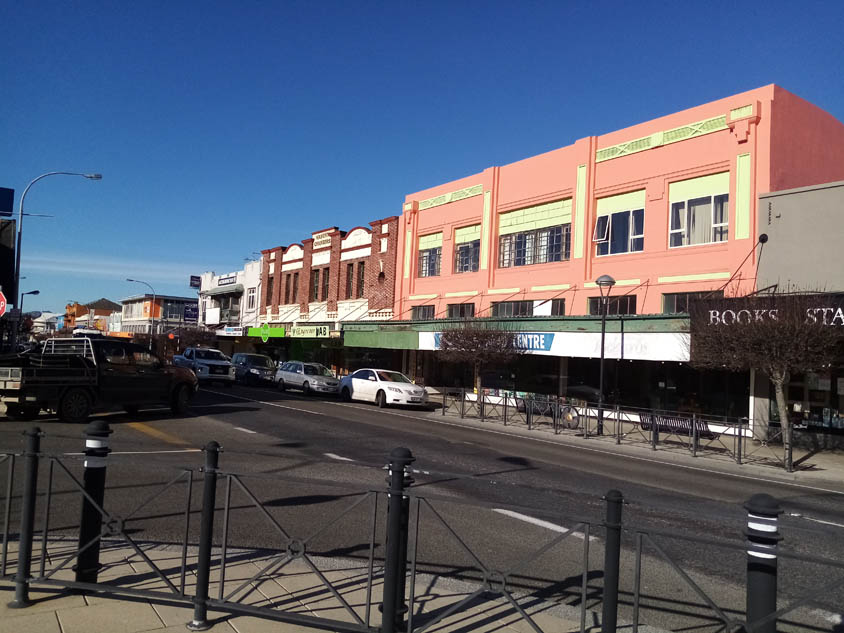 Dannevirke is south of Norsewood about 20 minutes. You may recall the Norsewood Viking Festival I blogged about earlier this year. Dannevirke was settled by Danish and Norwegian families in 1872, the name literally meaning ‘Danes’ Work.’ They were financed by the NZ Government and given the land. They were brought there to cut down all of the trees in order to farm. Ugh…what a job! No thank you. Not unlike the story of the folks who settled Norsewood, in 1917, much of the town was destroyed by fire, starting in a hotel. It devastated 27 businesses and two hotels. Well, you’d never know by looking at it today. For a Tuesday, it was pretty busy.

I did stop by that nice park/campground which is referred to as the Dannevirke Domain. There was allegedly some kind of petting zoo area, too. I drove through some really tall pines along a windy, narrow road which led down to a lovely little pond with ducks and other waterfowl. 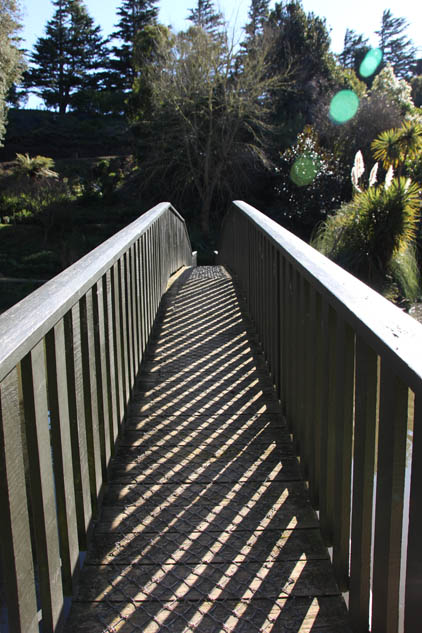 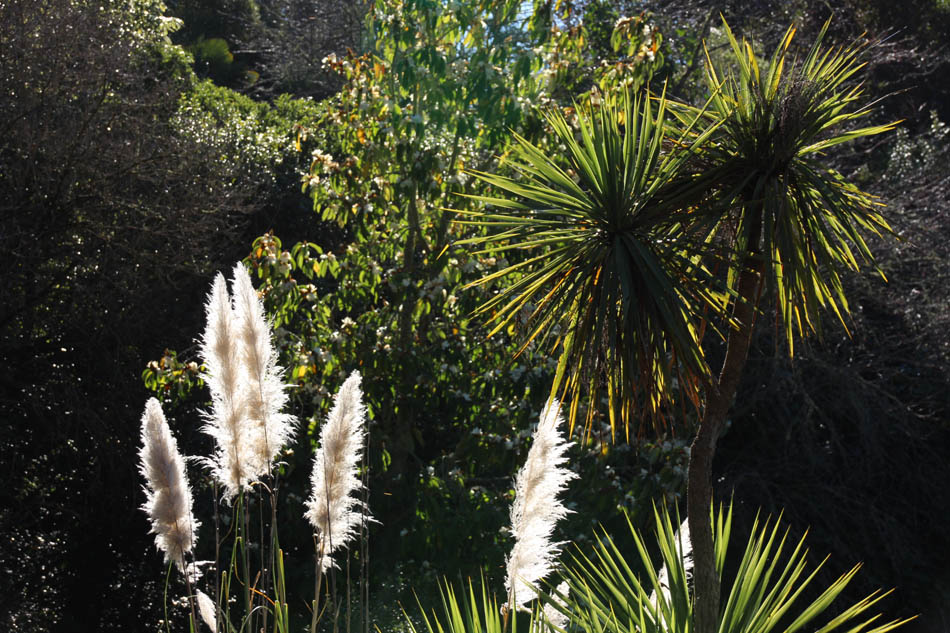 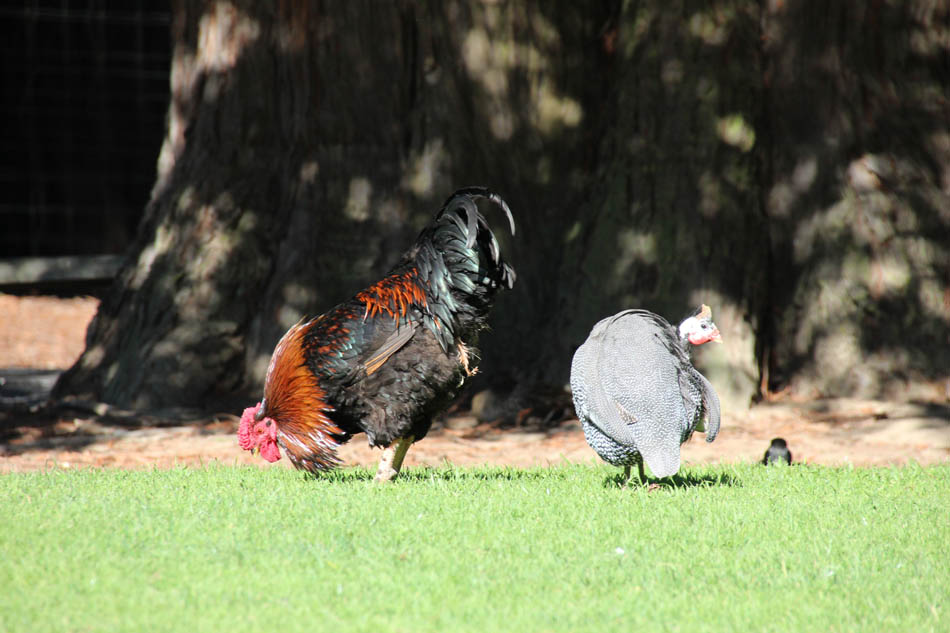 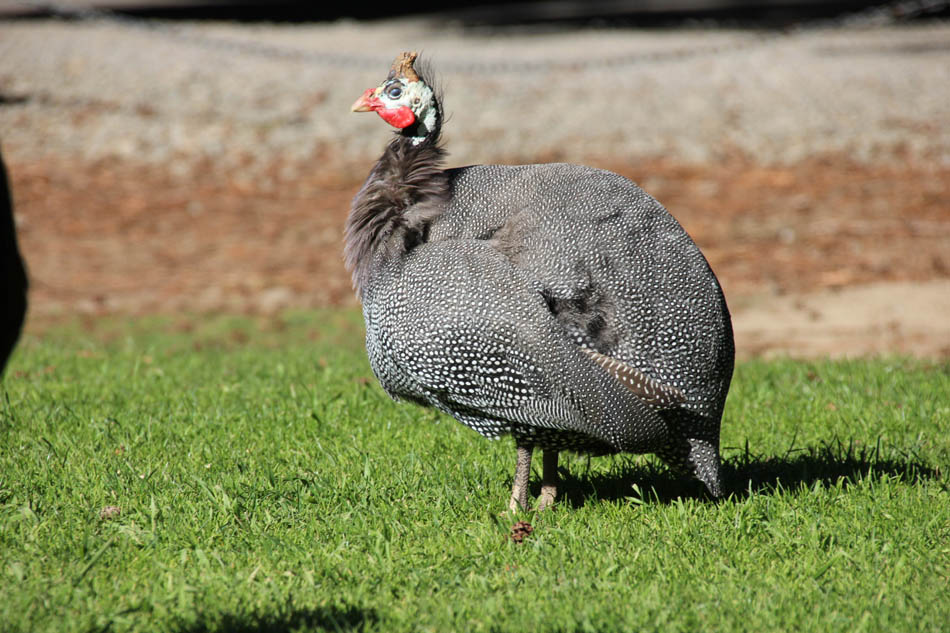 I took some paths around the park and crested a hill with some daffodils in bloom and wanted to see what was over the fence. Along the way, this pretty pine cone caught my eye and made me think of the thin sliced apple crumble I had made the day before. 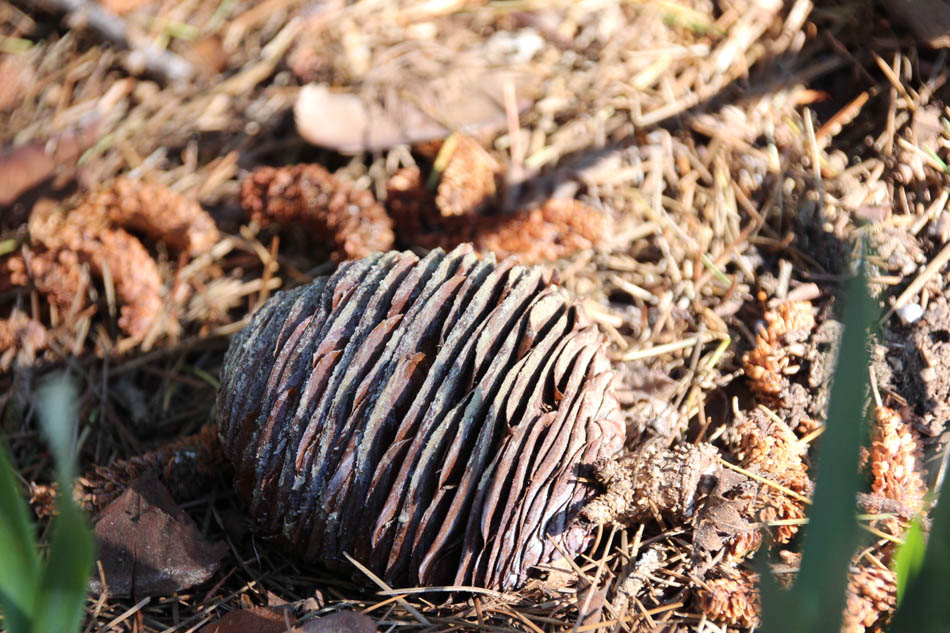 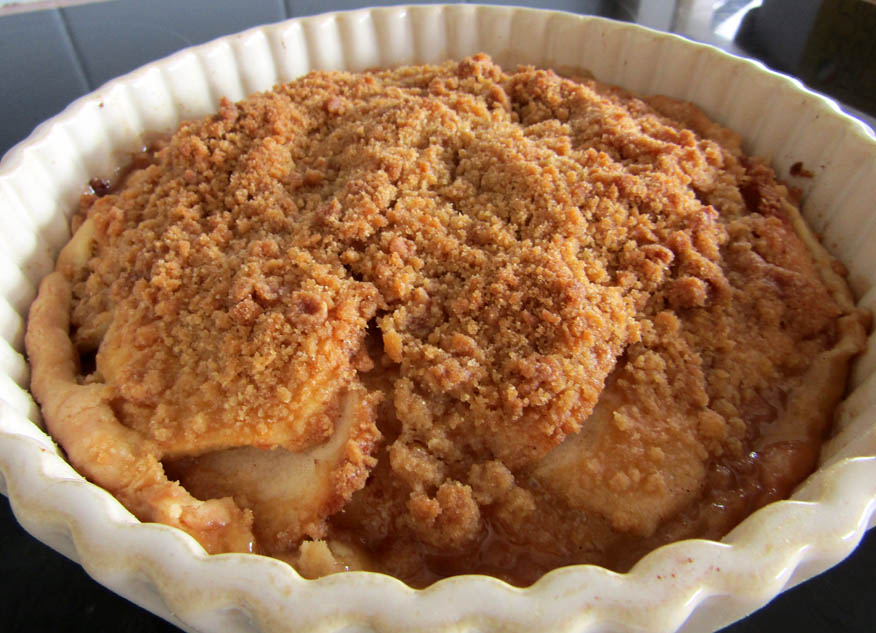 I walked a bit more through the field toward the aviary. 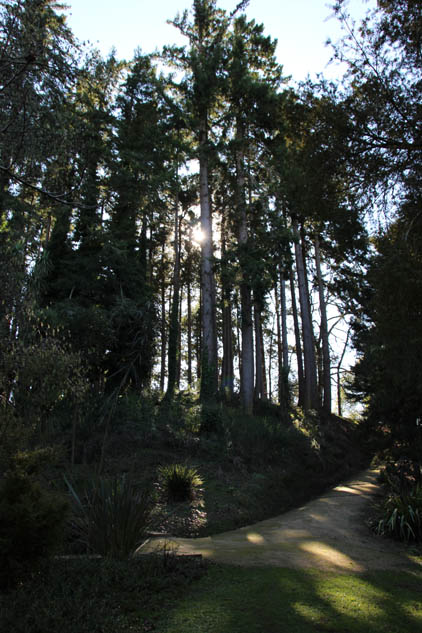 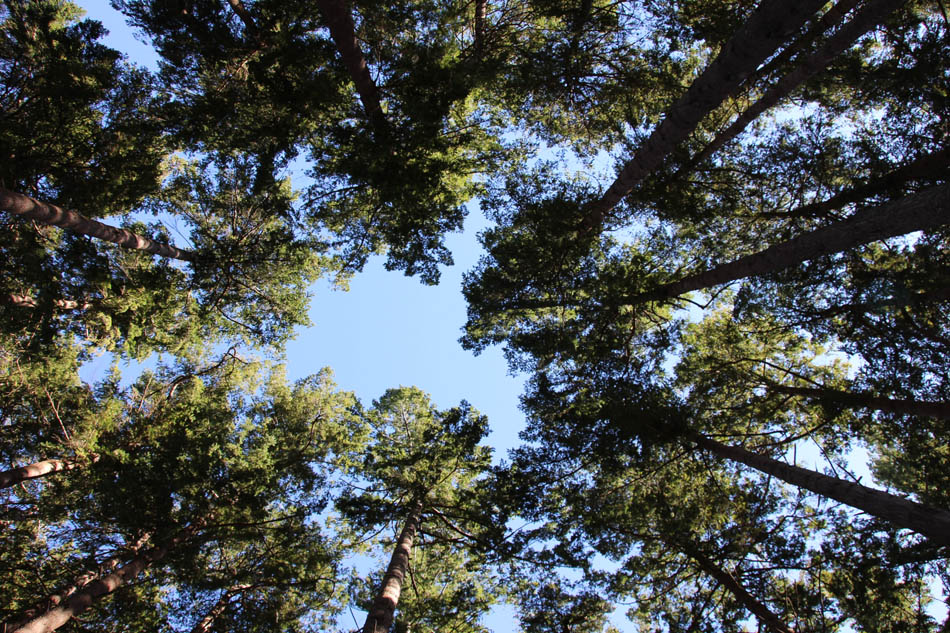 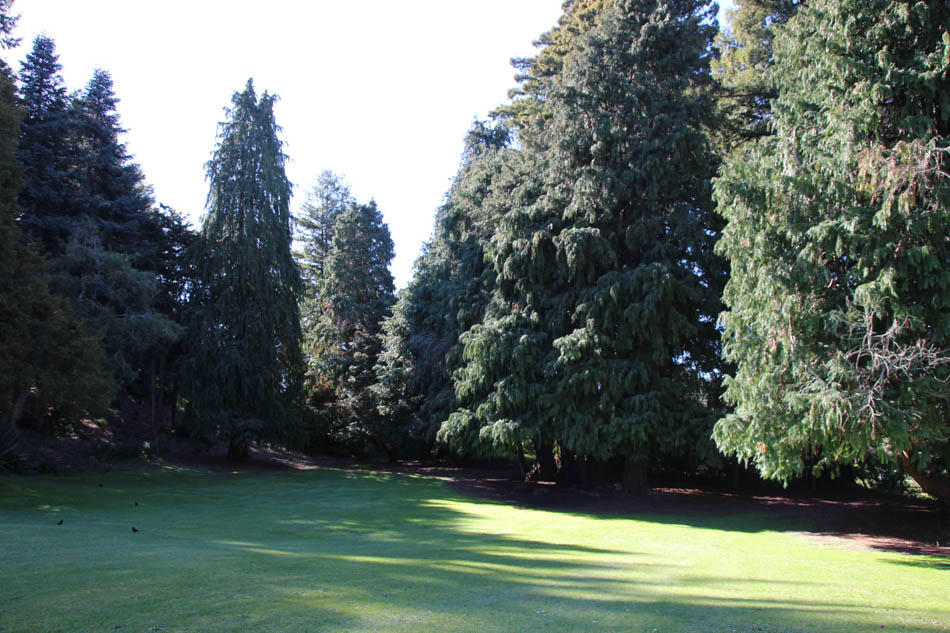 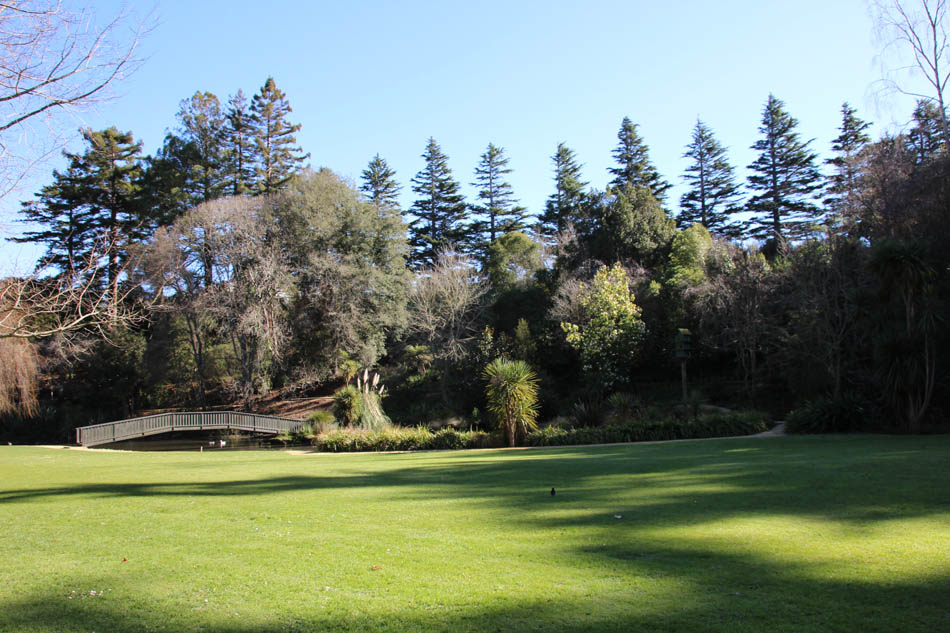 Sure enough, some exotic birds were all lined up along branches and on ledges facing the sun. 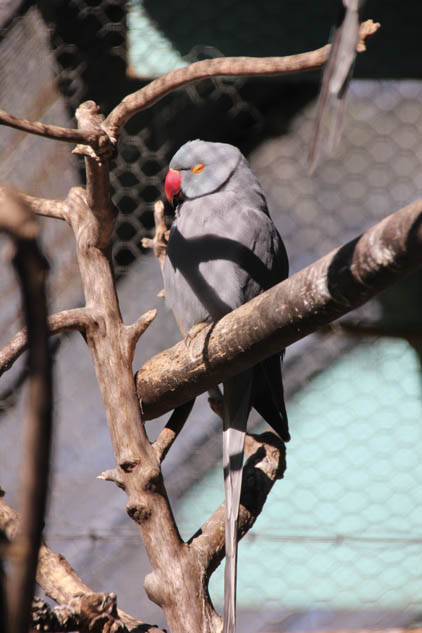 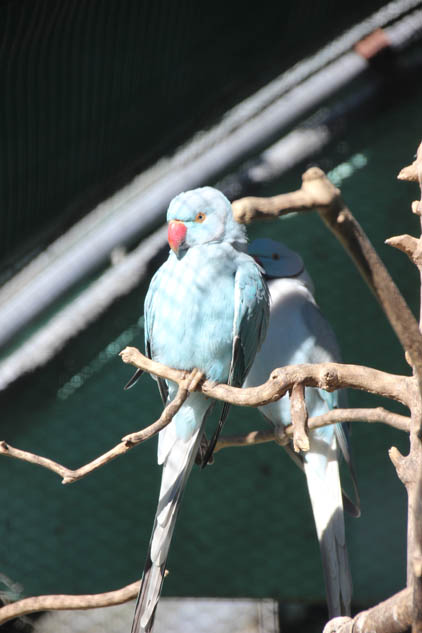 I saw this sign which made me chuckle. I couldn’t imagine what could possibly be there that would warrant that. But when I saw the high fence, I figured there must be deer in there somewhere (although I didn’t see any). 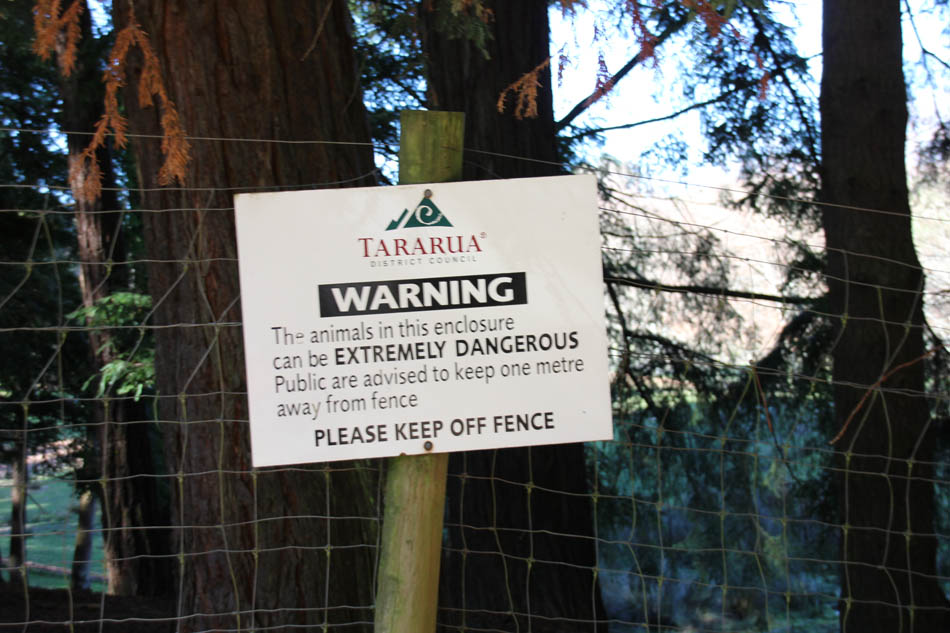 A short jaunt down the hill took me to another pond with a lot of Fantails and Tui’s who fed on berries in the trees. 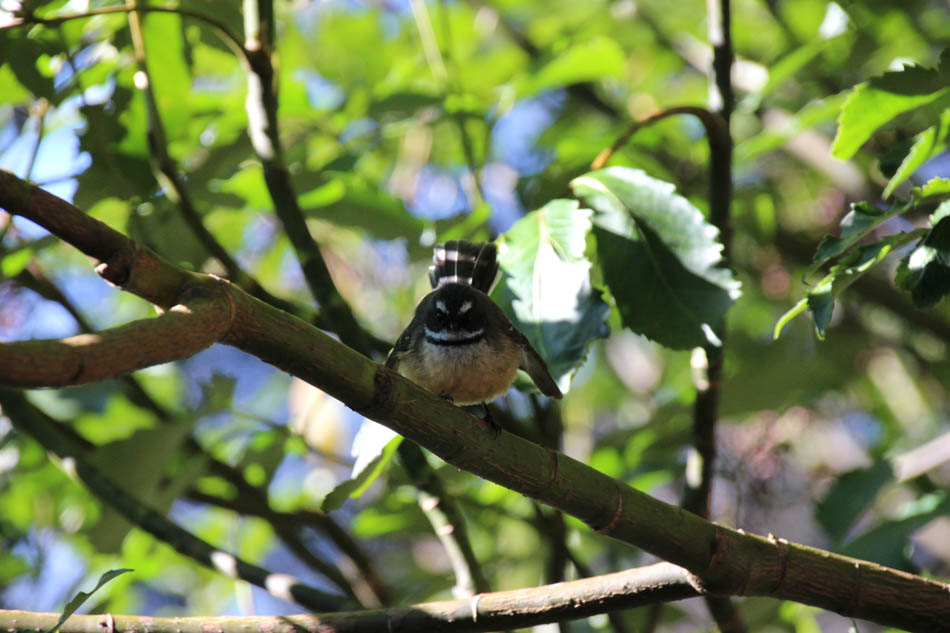 I decided to go into town and see where this road through the park led. Apparently, on the other side of this pond was where the DANGEROUS CREATURES lurked! 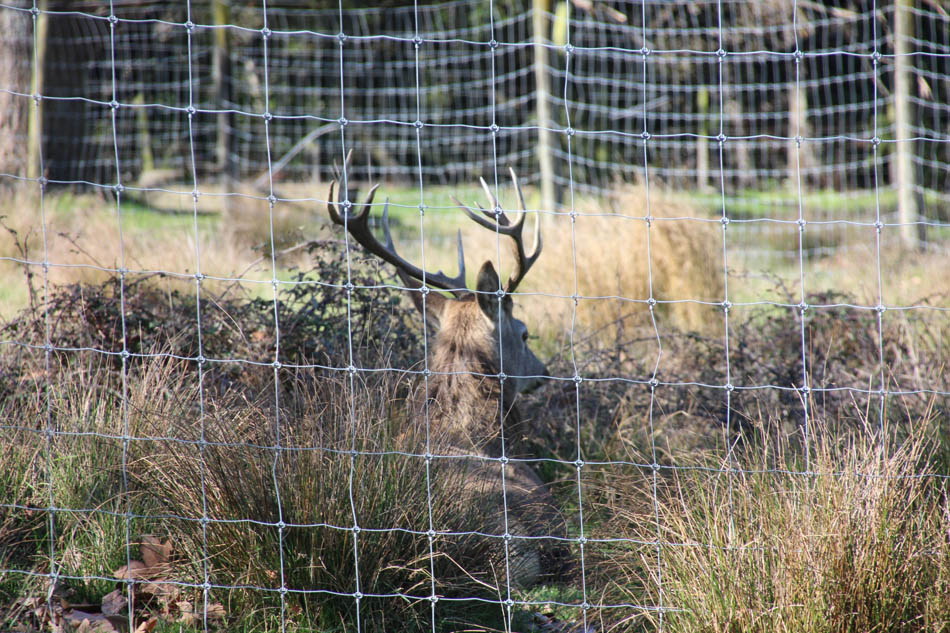 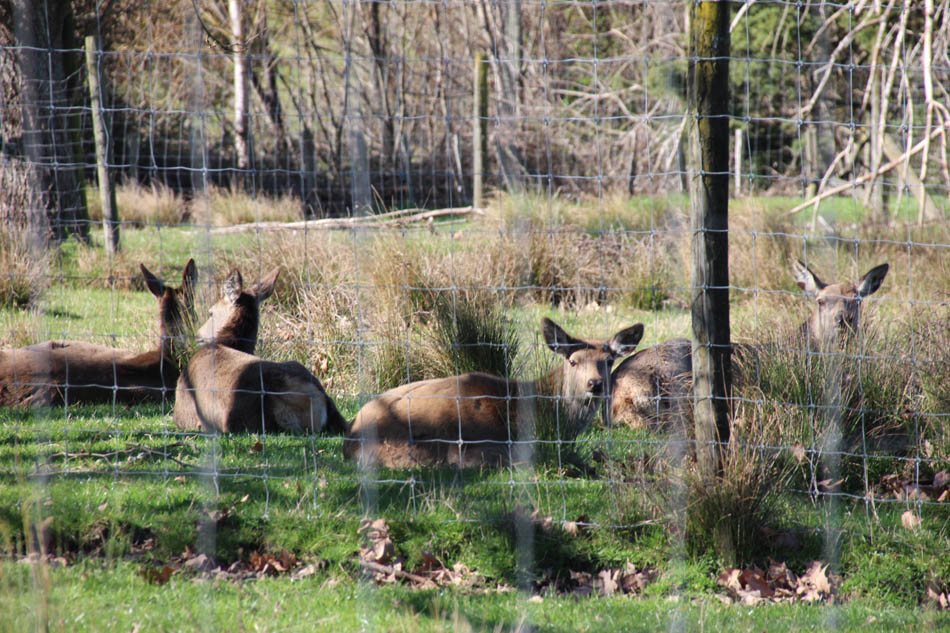 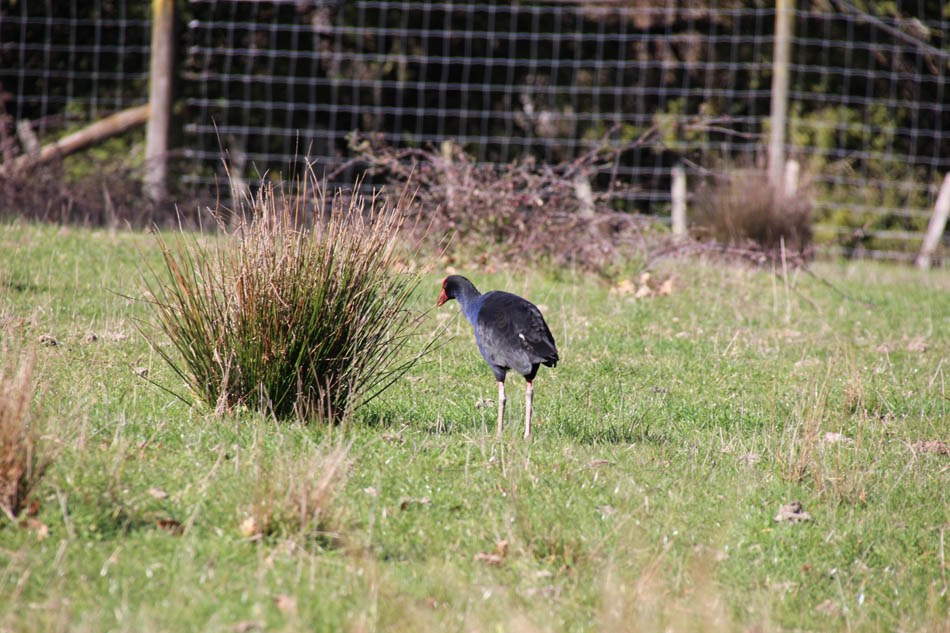 Some scared looking red deer and some Pukekos. Awe, it was neat seeing deer….it’s not like Texas where you see them everywhere. It’s pretty rare to see any in the wild. I’ve only seen them farmed, behind tall fences like this one.

With that, I headed to town to walk around and do some op shopping! I did pause to take a look at the old buildings, which I tend to not focus on, typically. 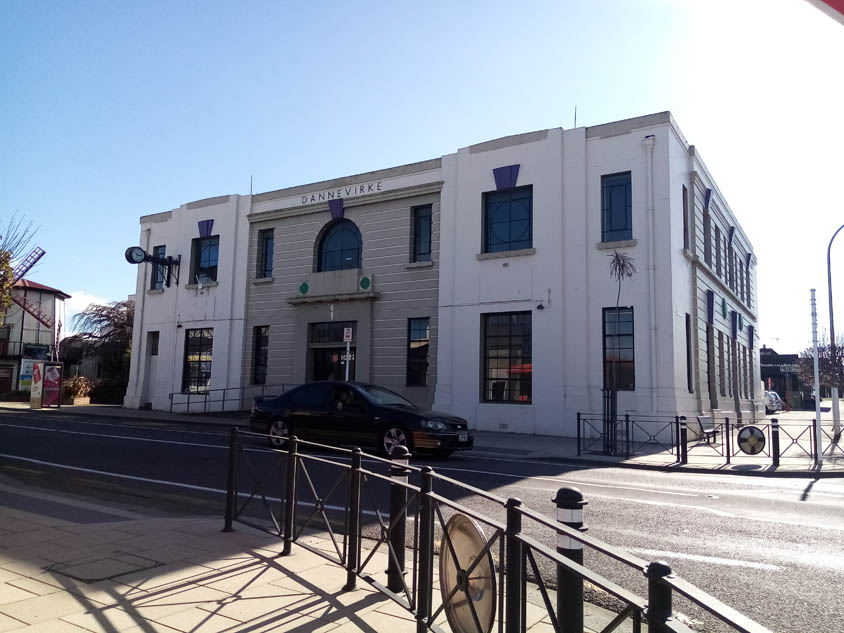 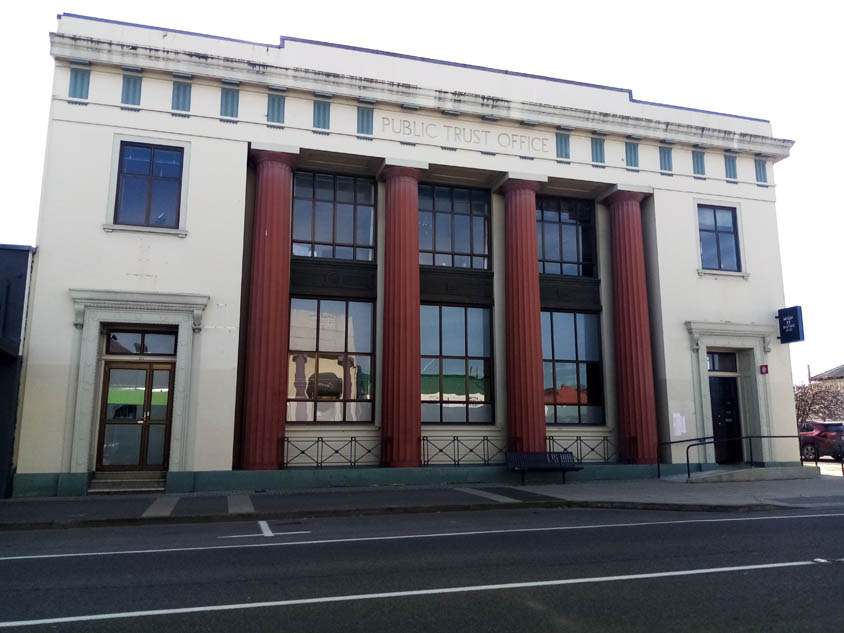 I’m glad I made the trip but that road is pretty dodgy, especially when it rains. Tons of big trucks coming and going and you always hear about wrecks along that stretch. So I’ll put off on looking for a job out there for now. However, I’ll be doing some posts about the beekeeping class in time (it goes on for a year). It’s been pretty fun so far!

As an aside here, we went to the Otane Sunday market last weekend and dropped into the little cafe there for a coffee. I remembered there was this darling little changing room in one of the restrooms that I wished I had taken a picture of last time, so I popped in to take it. The cafe is in an old house, as many of them are here. It gives you a nice homey feeling when you visit them. Creaky wood floors and always something to look at.

8 thoughts on “A Quick Day in Dannevirke”