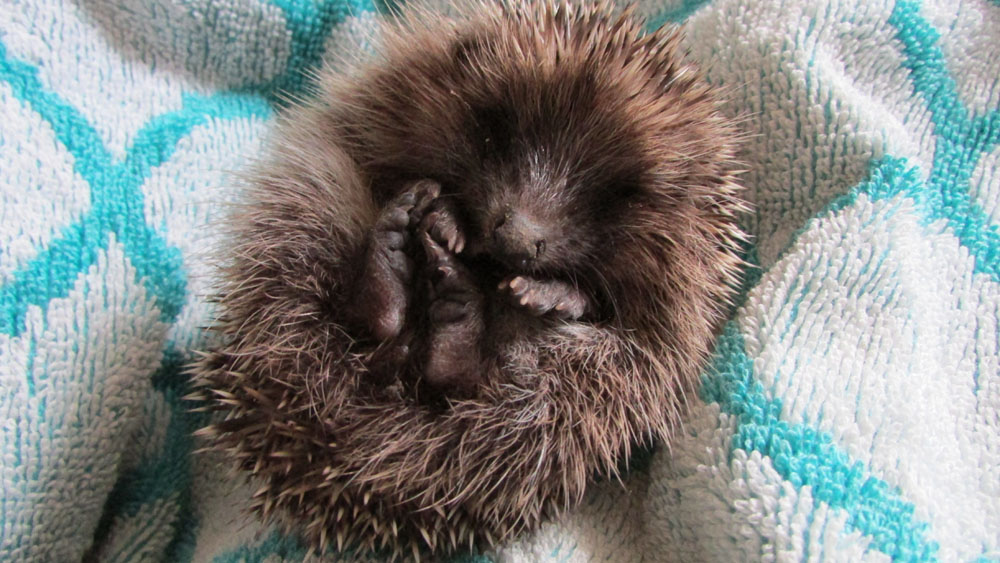 Back in late May, I overheard my neighbour’s small child say ‘hedgehog’ while I was out on the patio. Of course my ears perked up and I enquired with her. She brought over a tiny hoglet, curled up in her hand to show me. She said there were three or four under the house and that she was feeding them because she wasn’t sure if the mother was around.

Well doesn’t this sound familiar? Back in Blenheim, I took in three baby hedgehogs that were under our house. We’d find them out wandering in the day which wasn’t a good sign. It had been very dry, so I was guessing they were hungry and thirsty. I took them in and got them to a decent weight before releasing them late summer.

June is the start of winter and these guys were at risk of not surviving it. I offered to help take care of them, but she didn’t seem interested.

A week later, I was watering on the patio as the school kids were going by and once again, I hear that word being used and peer over the wall to see a girl with a small spiky ball in her jacket. Boy, this wasn’t a good sign with the baby being out during the day and now in the front yard, at risk of going into the street and being hit.

I quickly made my way to the sidewalk, assuring the kids I knew how to take care of them and that I’d be sure she was ok and release her when the time was right. She handed it over to me without hesitation. 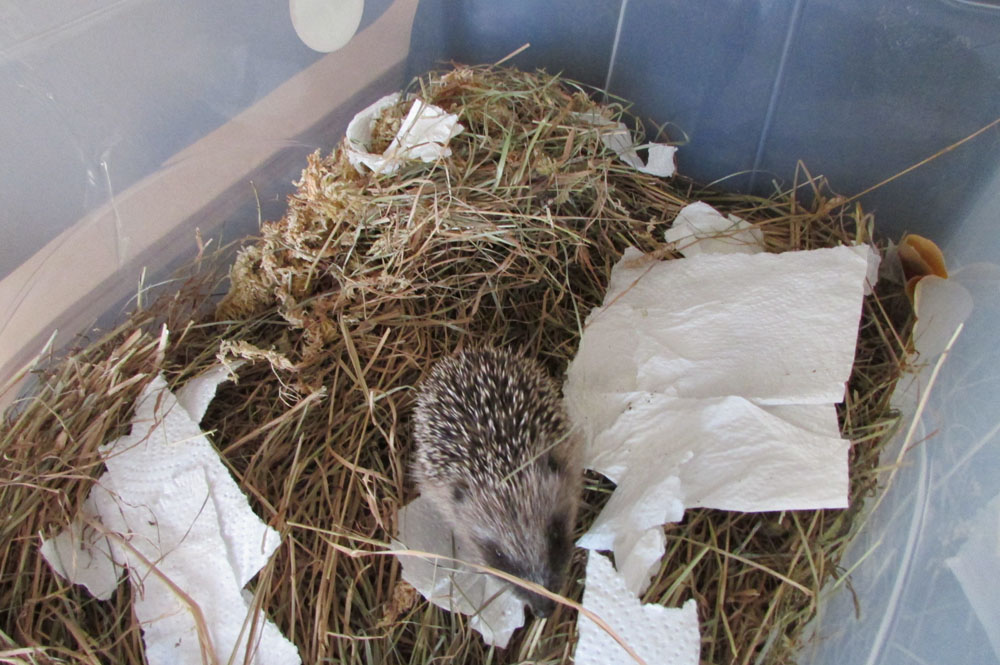 My boyfriend wasn’t surprised we now had a temporary pet after me longing to take in a hedgehog again. I didn’t know the fate of the others, but at least I have one that’s safe.

I figured my new little friend was about 3-4 weeks old. I promptly figured out the sex of the hoglet and named her Cardrona, after a small, snowy town I passed through once on the South Island. I loved the name and swore I’d find a way to use it.

I had to refresh my memory about what kind of food to feed her and got her comfy in a large plastic box with hiding spots, moss and hay along with a shallow water dish. She weighed in at 104 grams (3.6 oz.).  Turned out that hay was not a good substrate to use and not easy to clean up (plus it stuck to everything). However, she seemed to instinctively know how to build a nest out of it. 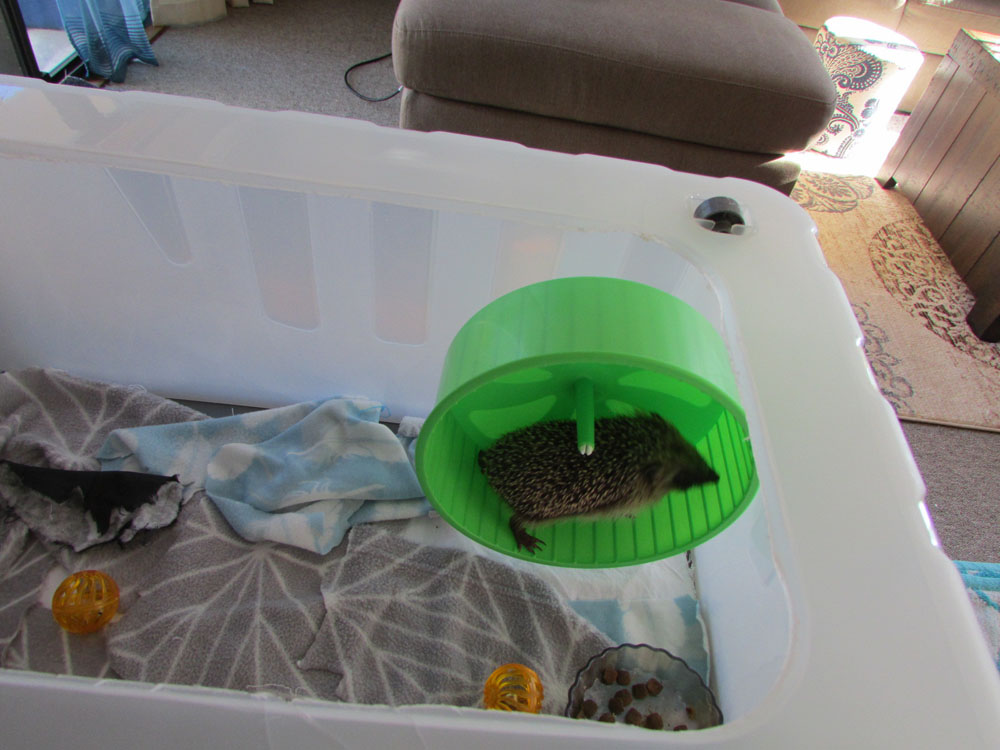 I got on a hedgehog forum and most people used small pieces of cut up fleece and warm blankets, so I followed suit. Being that hedgehogs are nocturnal and can roam up to a mile or two per night, this little box was not the best thing as I felt she was going crazy, feeling trapped.

The members of the forum swore that the Kaytee comfort wheel was perfect for them to run on, so I found one and got it. Unfortunately, she outgrew it quickly and I had to buy the giant one instead a month later. She loved that thing! Somehow she just knew to play on it and did it everyday. It was funny to see her enjoy it so much. It also gave her the exercise she needed and something to do while we slept. 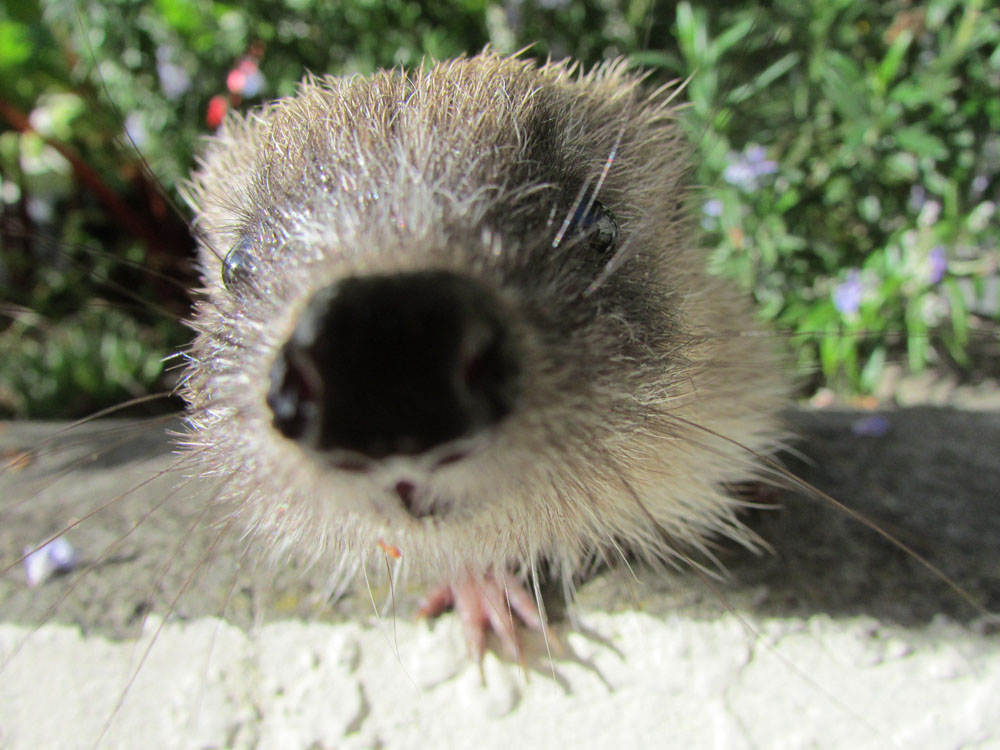 You may be wondering what they eat. In the wild, they’d hunt for insects, worms, grubs, eggs, snails and even carrion. I attempted to feed her some mealworms but she wasn’t crazy about them. Instead, she got cooked chicken (sometimes cooked ground pork or beef), pureed baby food veggies and fruits and quality cat food. Eventually she was able to eat hard cat food and sometimes I’d scramble up an egg for her to add in small quantities. She even got used to eating two blueberries a few times a week as dessert. 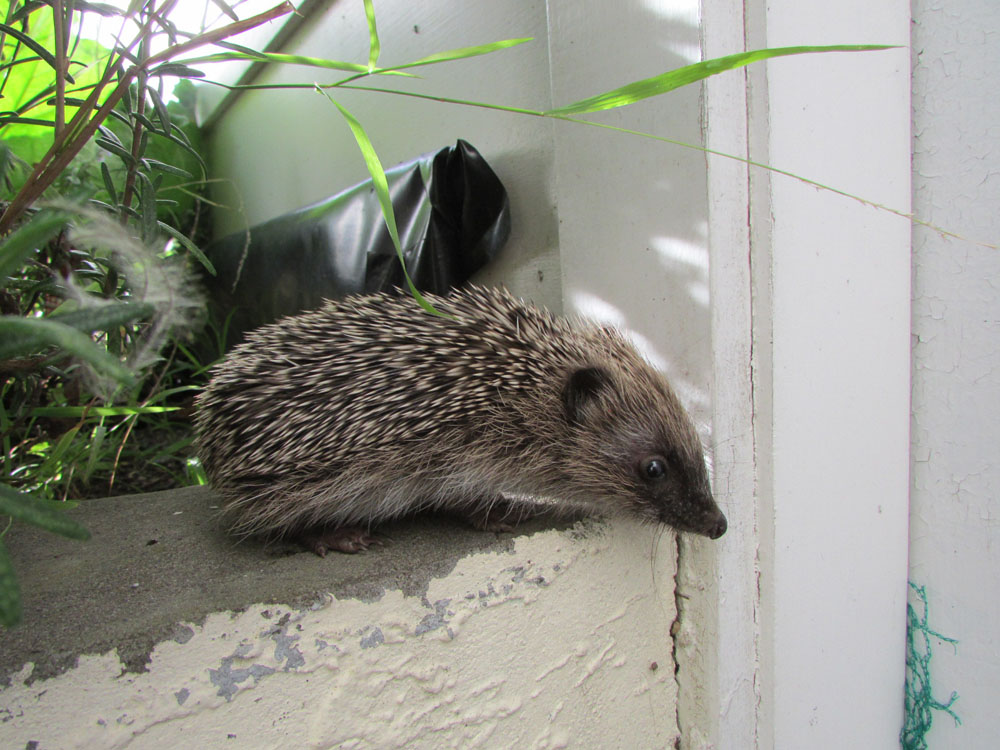 I kept track of her weight each morning and intended to keep her over the winter until it was warm enough to let her go (this meant 3 months at the very least). She went through a phase of losing her baby spines, which I’d find in the carpet, on my clothes and of course, in her bedding. She also got darker in color.

She was a good kid and grew heavier with each passing day. While I didn’t like waking her up in the daytime, I wanted her to get some fresh air and have a run around the garden, so would take her outside for play time. She would attempt to dig in the dirt sometimes and once, actually ate a mantis of mine which I found out a bit too late (it was sticking out of her mouth). I was sad about it, but knew eating an insect was good for her and was happy that she knew that was “real” food.

Here in New Zealand, hedgehogs are considered “pests” by the government. Because they are ground dwellers (as are our native birds) and can eat eggs, they want them eradicated. They are just one of the many animals here that are targeted with traps and poison in order to save the natives. While I understand they want to do everything possible to save native wildlife, it’s not the fault of the animals who are here and were introduced long ago to the country.

It’s very unfortunate that you come across people who scrunch their nose at the mention of hedgehogs and view them as terrible beasts that have no value. You sort of have to whisper that you’re helping one out or that you have one in your possession. However, a lot of people do like them and find them beneficial in their garden at controlling the pests like snails they don’t want around.

As Cardrona grew, so did her need for space. I fashioned two of the boxes together and put them on a chair so she didn’t get the cold draft from the floor. She hung out in the living room with us until it came closer to the time I thought I should get her more accustomed to the cooler temps.

Being that I hate to keep animals in cages, she had spots in the house she liked to go. Under the couch was one, which I had to put a stop to. In the shoe closet (I put a box in there for her) and one time, lost her completely. I found her upstairs in a closet. I’d never seen her climb stairs before! So I had her do it for me the next day. She got pretty good at it, too!

That’s when I put together what I like to call a “playpen” for her in the den. It gave her more room to roam at night and it was also much cooler in there. I would add different things like Christmas ball ornaments (which oddly enough, she’d hide in difficult places), pine cones, abalone shells, stuffed toys, tunnels, a talking round toy (she hid that one too), just to provide some enrichment. 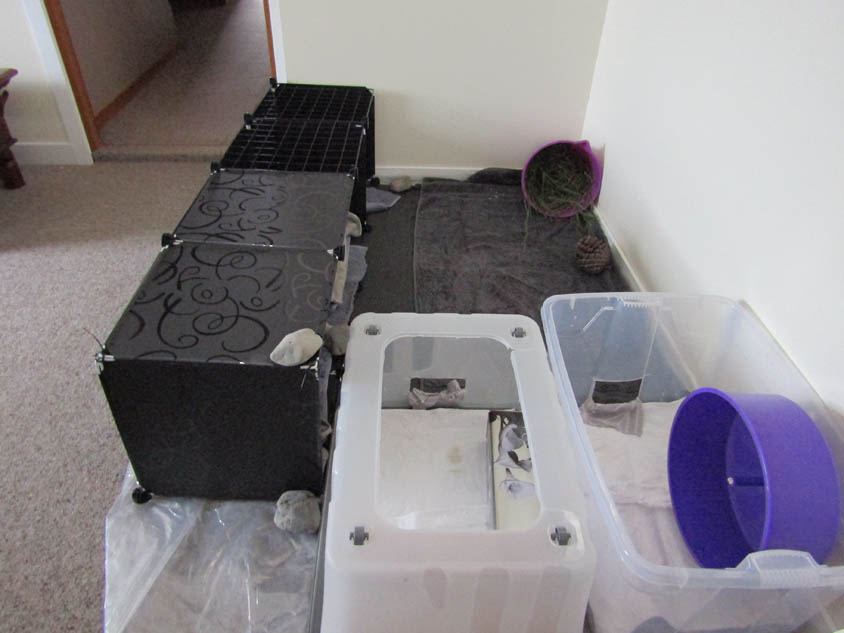 By this time, she was about 430 grams. She still needed to gain a bit more before being released, although since it was going to be spring, I didn’t need to worry too much since food should be plentiful.

However, spring didn’t seem to be coming. I could just feel that she wanted to get out of here and I really wanted to let her, but freezing temperatures at night weren’t going to cut it. I couldn’t throw her out like that, so she had to wait. 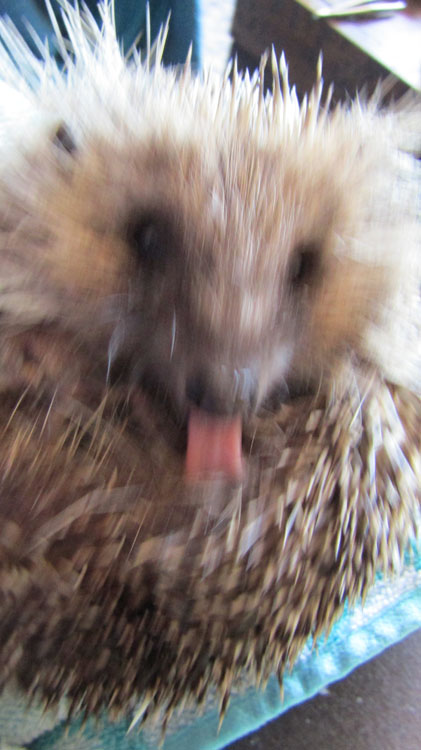 I was told that the night time temperatures needed to be 50F for at least 3 days in a row. I looked at the forecast calendar and didn’t see that happening at all during the month of October (that’s a month after spring began). It was colder than it was last year. 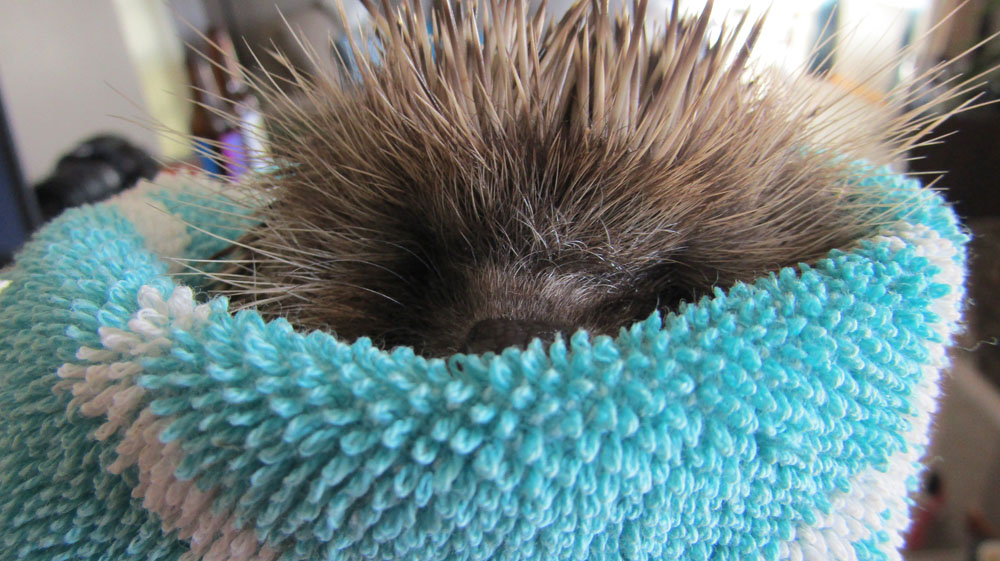 However, we had a stretch of warm temperatures one week and I felt it was probably ok to release her during that time. My client has a large farm and she had seen hedgehogs around her house, so that was a good indication for me that it would be the perfect place to release her. There is a nice clump of woods near the house with a lot of compost and shelter, so this would be where I’d let her live her life. I had been advised to give her a dose of flea and worm medication for kittens, which I did. Gives her a bit of a fighting chance out there for a while.

The day of her release was awful for me. It was like killing time before you leave to the airport. I’d had her for four and a half months now and didn’t realise just how attached I had become. I waited until 6:30 or so (sunset at 7:30) to take her and her box, food and water out there. 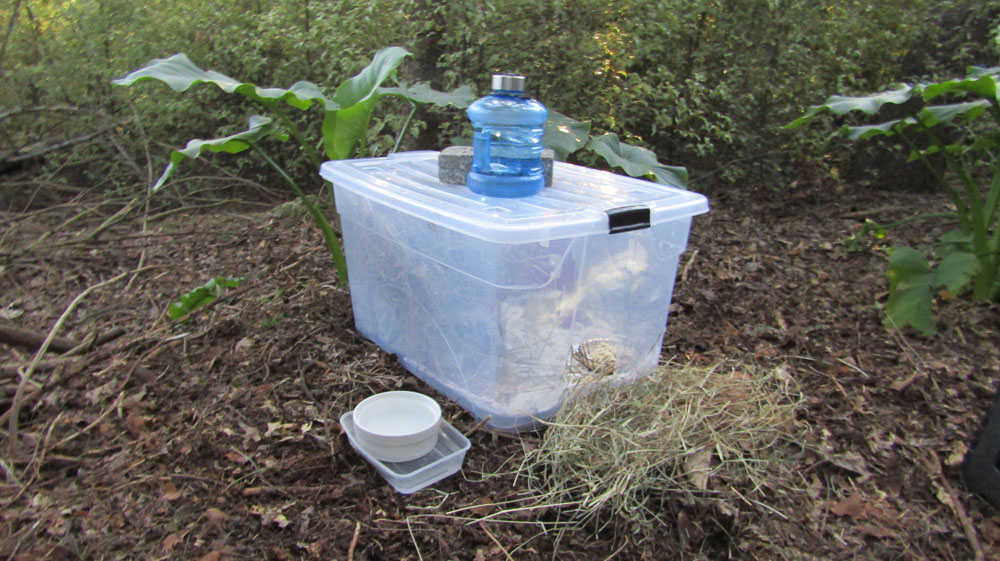 I had scouted out a spot the day before near three soon to be large calla lilly plants and set her box there. I put some straw in it just in case she wanted to use it, along with extra blankets to keep warm. She had a full dish of food waiting when she woke up and water outside of the box.

I sat there and watched to see if she’d wander out, but all she did was come out of her larger box, sniff the air quite a bit and then disappeared into a smaller box. I waited another 20 minutes as the sun went down, but decided to leave. I’d come back the next night to check the food and see if she was still in the box. I cried all the way home.

The next evening, I returned to find her food uneaten, which was odd. She must have gotten excited over the new freedom and simply did not return. She weighed 630 grams the day I released her, so if she had any trouble finding food, she had plenty of fat reserves to live off of for a while.

I tossed the food and put dry cat food there instead just in case she came back. I checked again the next night and she hadn’t eaten anything, as well as two nights after that. I figured she was now completely on her own and no longer needed her box, food or water so I took it all back home.

I hope my client ends up seeing a bunch of babies at some point and I’ll hope they came from Cardrona. May she live long and prosper!

6 thoughts on “Cardrona the Hedgehog”