I was looking forward to having an actual turkey this Thanksgiving after two years without one. It’s usually been Chinese food (sort of like ‘A Christmas Story’ movie) or pizza. But this year, it would be different. Weeks ahead of time, I searched the frozen section of the stores. The big store here had quite a selection. And then I saw the prices. Keep in mind this is in New Zealand dollars, so it’s not quite as bad as it may look. That $108 turkey is $78 USD for 14 lbs. I settled for the $43 one at a different store which came out to $28 for a 7.7 pounder. I feel like more of a Butterball than this thing.

Yep, looks kinda like a chicken, doesn’t it? Once it cooks down it may become a ‘cornish’ turkey. I was able to find jellied cranberry sauce (my favorite) in a jar(!?) which ended up oozing instead of slipping out. Bought some potatoes, corn, rolls and made a rhubarb/strawberry/blueberry tart for dessert. The Pepperidge Farm stuffing I ordered from the American grocery store in Wellington even showed up today!

It’s odd feeling this connection to a holiday back home being over here. I have such fond memories of Thanksgiving with my family with all the chaos and decibel levels nearing heavy metal proportions. It was always a good time to be around everyone enjoying themselves. I miss it and it’s just not quite the same this year. 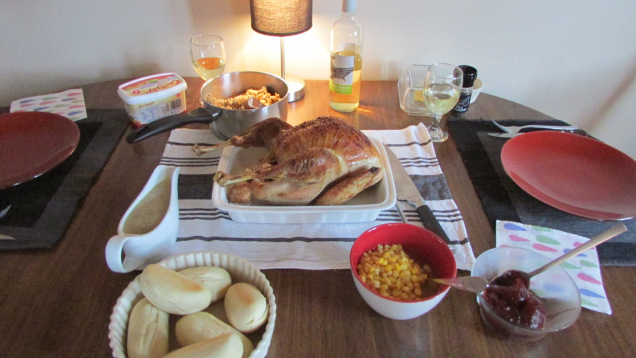 On to my favorite current subject, THE EELS! Last you may have read, we went to Nelson to feed the tame eels. Just up the street from us is a caravan park with a huge sign talking about ‘Home of Eddie the Eel’. That would indicate that there are indeed eels in this creek, so we went looking one day. We never did see any (saw a trout though) and I decided to come back with food next time. Doesn’t it always do the trick? Sure enough, within minutes the eels started appearing and a new past time was created for me. Here’s quite a long video showing some of the eels. There are usually around 8 that appear, all different sizes. I’ve even started naming them (yes, I can tell them apart). Of course I can’t resist naming the big one Lucille (heh heh…get it?).

Well, here’s the cool part. I had a really long branch of bamboo which I was using to skewer the pieces of meat onto. The eels have bad eyesight but their sense of smell is pretty good. Most of the time it could be right in front of them and they wouldn’t even notice. My tactic was to softly brush the bamboo against their bodies and they’d follow their way up to the food. It worked really well! I used the bamboo stick on three separate visits.

So the one day we went back, it was just for a quick feeding and I didn’t use the bamboo. I just threw the pieces into the water and within minutes, they all showed up. Then I saw two different eels run into small branches stuck on the creek bed and they bit at them! One followed the branch to the top and opened his little mouth! What smart eels! They learned!! What’s even more impressive is that they remembered. Well, they were disappointed of course because it wasn’t my bamboo stick and there was no treat at the end of it.

Being that there are hardly any animals in New Zealand, this is about as good as it gets for me. So please forgive my enthusiasm over the eels…this is life in the slow lane!

I did take a nice trip out to Kaipupu Point which is a nature reserve that was created to give native wildlife a chance to flourish. In 2008, they constructed a fence around the 42 hectare section of this peninsula ‘island’ to keep out rats, mice, possum, stoats, etc. It was quite an undertaking and you really have to give it to these folks for wanting to save the natives. They may introduce kiwi here eventually and they’re hoping the little blue penguins show up one day as well.

Our group, who got to go out here for free and attended a two hour lecture beforehand, climbed up to a lookout of the Sounds and took a lovely stroll through the forest.

Here are a couple of photos of the predator free fence, one which leads down to the water. 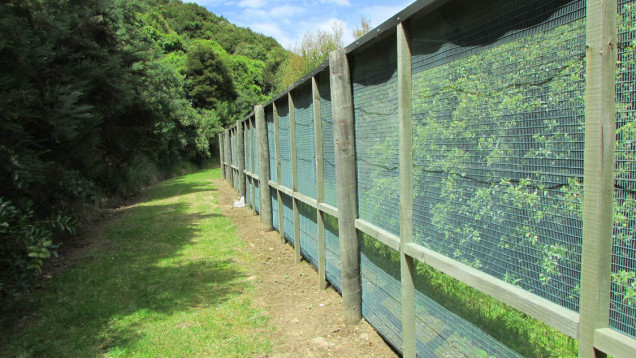 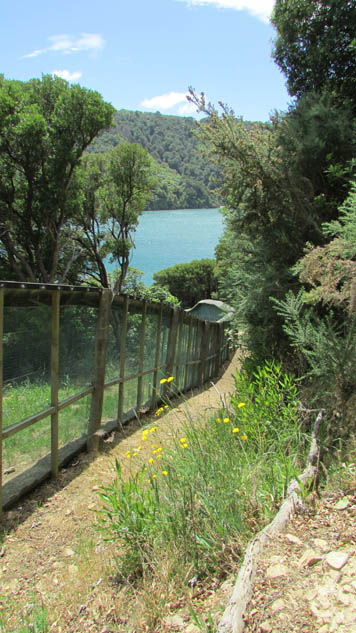 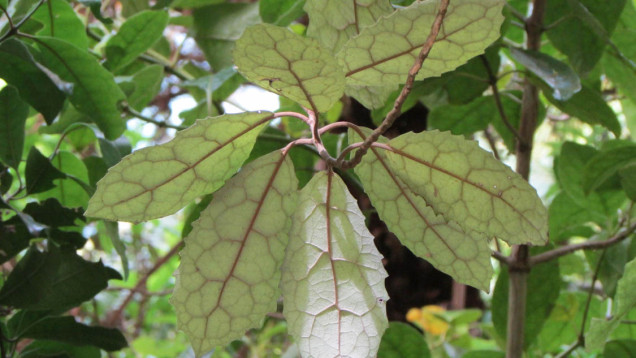 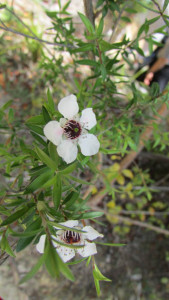 We heard birds singing and I was able to spot a couple of quail but they were pretty elusive and I got a bad shot of one. It was a really lovely day here and I was grateful to have had the opportunity to get out there and see what this place was all about. The admission is free (donations suggested) and you must take a boat to get there which can cost around $30 round trip. It’s unfortunate that there isn’t a more affordable way of getting there, but maybe in the future they will figure out a way. 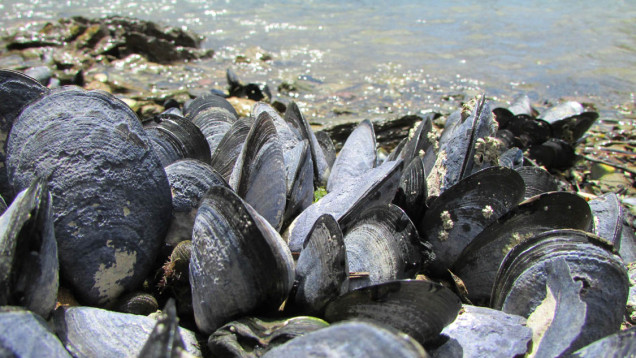 In other news, my little veggie gardens are finally starting to produce some PRODUCE. I have three beds with tomato, lettuce, celery, bell pepper, (soon to plant jalepeno’s), rhubarb, strawberry, spring onion, parsley and broccoli. Plus a few little weeds in there that are relentless. 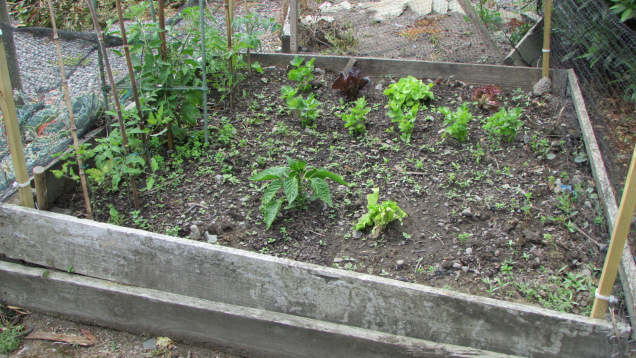 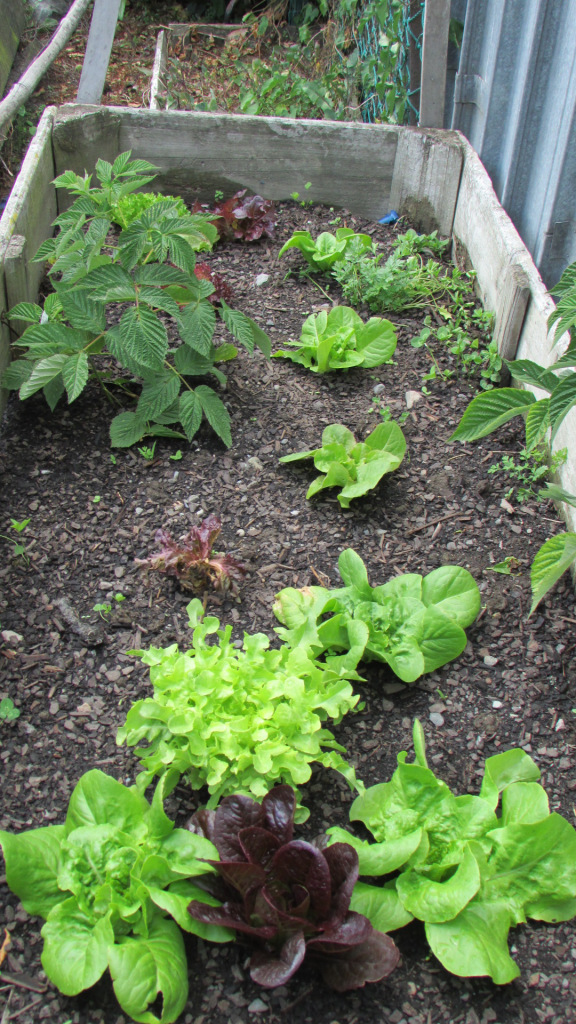 My rock garden out front is taking shape and the colors are popping! 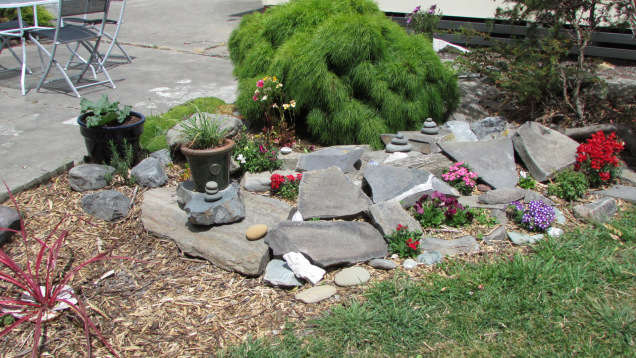 The mandarin tree has started making tiny fruits and the lime tree has even bloomed! You can barely get limes here for love nor money so hopefully they come out good…this could be a revenue stream for me!

Summer is less than a week away and I’ve never been so ready for it in my LIFE. At least I don’t have to light the fire in the mornings lately and I don’t sleep in layers anymore. So, bring it on, New Zealand!!

5 thoughts on “Thanksgiving in New Zealand”