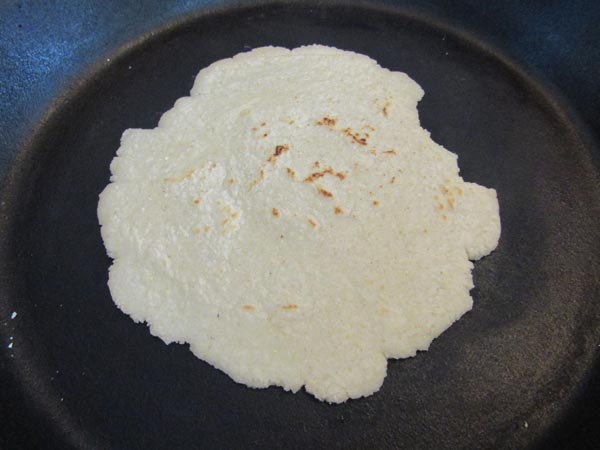 I talked to Camille this morning and we got on the subject of making corn tortillas from scratch. I told her it’s been on my To Do List for quite a while now…too long, actually. I think I’ve attempted this only one time before in San Antonio, of all places. Like you really need to do that there. My recollection is that they came out looking like Africa and all of the countries within it. I didn’t have a tortilla press then and I don’t have one now. Not for $50, my friends….no.

I did everything BUT make tortillas up until about 3pm today. It can’t be difficult, especially putting the masa together, which I did have. So I consulted my first and favorite go-to Mexican food bible by Mary Margaret Curry from 1971. I can see in my mind’s eye my mother’s copy of the book, splattered with red enchilada sauce around and mostly ON, the page of the recipe. You knew how to find it without consulting the index.

Mine is in a bit too pristine condition, using it a couple times for the sauce and more than a few for flour tortillas. But never mind, the recipe has got to be in there. Nope. ???? So I grab my other San Antonio Los Barrios cookbook and naturally, it’s on page 4. I found it odd that it didn’t include salt so I asked Uncle Google for a recipe, because I’m pretty sure there should be salt.

Choosing the one with the highest ratings, I see that indeed salt was added and that’s what I felt comfortable with. It was suggested to use a heavy pan while squashing the masa between a baggie which had the ends and zipper cut off of it. Quart size. What’s a quart size? I decided on a sandwich baggie since that was about the size of a tortilla.

Hot water, masa and salt. Throw it together, turn it into something that feels like Play-Doh and let it sleep for 10 minutes. Let the squishing begin!

I figured the cast iron pan would do the job, so after making a nice ball and putting it between the plastic and pressing the pan on top, I lift it up and see it needed help. So I put some more pressure on it and while round, it was way too thick. Plus, I really wanted to cook them IN this pan.

Out comes the rolling pin. From my flour tortilla fails, I came to find out you only roll from the center out, so that’s what I did. Ok, not bad, not good…throw it on. Oooo that smell. Yeah…I know that smell from somewhere! I’ll use the metal bowl to squish them down next time.

Errr way too thick, I think. Thinner next time. This was the first taste test and I was extremely underwhelmed. It tasted nothing like I hoped it would. And cheeeewwwwwwyyyy. I chewed and chewed like I was eating a sinewy steak for some reason. I wouldn’t serve this to anyone I knew. Depression sets in.

On to the next. Ahhh memories of Africa. I can actually hear my Mexican Grandmother laughing “with” me right now. Another lesson I learned was that if they don’t roll out round, the dough either hadn’t sat long enough or it had too much of something (for flour, I think it was lard/butter). By tortilla #4, and seeing I wasn’t going to make many, I figured I may as well add more water and see what happens. I already knew these were wasted, why keep trying the same thing?

Well that may have helped…they rolled out round and the dough felt more like flour tortilla dough instead of somewhat grainy (this would’ve been about 1 3/4 cup of water I should have used to begin with). They rolled out thinner and weren’t as stiff. They even tasted slightly better (or maybe I was just used to it by now), but still not enough to save the day. I’m now recalling someone saying to add some lime juice to the mix.

Maybe it’s one of those things where you never really taste homemade ones, so I’m just used to the store bought ones which have WAY MORE than 3 ingredients in them. Let’s look up the ones I get that are made in California.

Mmmm gum, gum, acid, acid and acid. And this is what I think is “normal”??? It’s time to ask some of my Central American friends for some recipes and tips. I’m now on a mission.