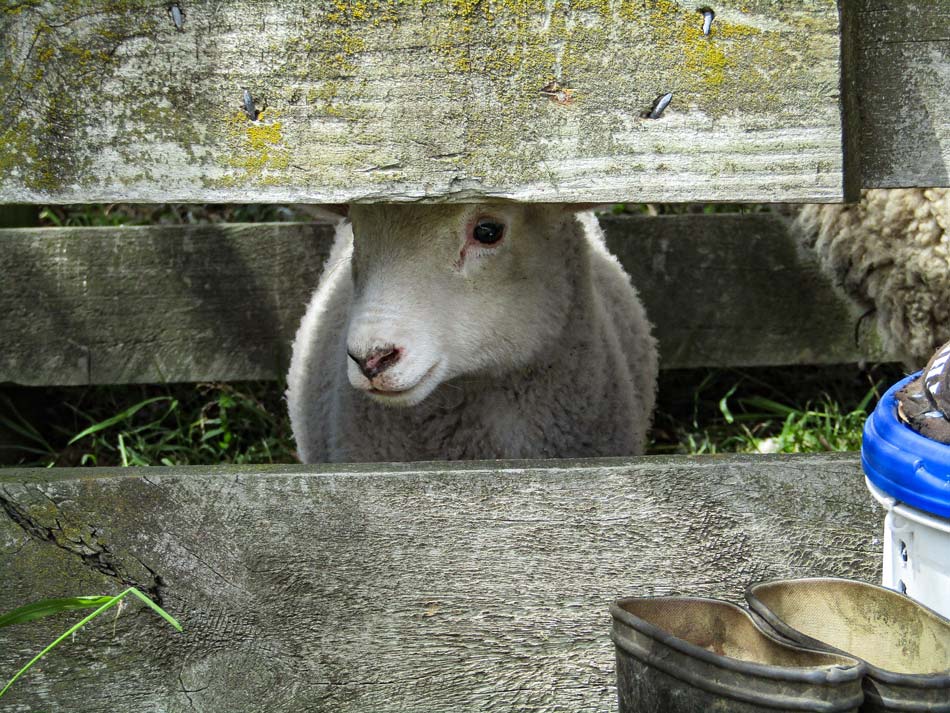 It’s October here and it’s finally starting to warm up. It seems like it takes until summer for it to feel like spring. The temperatures can be unpredictable; one day it’s hot and the next day it’s freezing cold. When I go to visit my sheep friends on a warm day, I feel bad for them because they’re so hot under all of that heavy wool. They tend to stay in the shade. Who can blame them?

It was getting time for them to be shorn….sheared….shaved? Whatever they call it, the fluff was coming off! I happened to arrive before they got started and figured it was a good time to document this. I had seen it happen down in Middlemarch where the shearers stayed for a few days to get through the thousands of sheep. I took a video of them at work. My back aches just watching it.

Bill would tell me that for the price he gets for all of the wool, it only offsets the cost of the shearers time. Seems to be such a shame the wool isn’t worth more…it’s so lovely.

But on Liz and Shane’s block, there were only a few sheep to do. We herded them into the neighbor’s yard and got them in a holding pen for easy removal by the shearer. Man, it was hot that day. I was burning up in the sun. The little “spoiled” lamb (the bottle fed one) was crying and crying the whole time. I could feel they were all nervous about something (and rightfully so). At least it wasn’t anything worse!

This particular lamb, named Rej appeared to not be very cooperative so Liz carried him to the pen. They’re so funny when they’re being held like that. Pretty much the only way to hold them at that age! He’s the spoiled one who got bottle fed after being rej(ected) by his mom, hence the name. We have a good relationship and he gets a lot of scratchies from me when I visit.

My boy Richie was the first one up…he’s the bottle fed lamb from a year ago that I have a good rapport with. He knows me and we have long talks (mostly one sided). However, in the video I took, he actually appears to have answered me which freaked me right out! So without further ado, here’s the video of Richie and the lambs being prettied up!

He did pretty well but was visibly upset for a while afterward. Lanolin was just oozing off of him and as I pet him, my hands were just soaked in the oily stuff. I did keep some of his wool to remember him by, as he’ll be sold off in the next month or two. I’m holding back the tears.

The first lamb was squirmy and both had their tails trimmed off. They had been docked and the tail was just hanging by a thread, so he shaved off the bit still hanging on and Liz proceeded to throw one at me. EEEEWWWW!

Some of you may know about Oscar, who’s the big ram (we don’t get along). Well, I do have a video of him being shorn as well and I thought he’d REALLY be mad after it was all over, so I hid behind Shane when he was let go. But nope, he was pretty chill and didn’t try to attack me which was good. He’s a big boy.

It didn’t take too long and I was able to put my shepherd skills to work by taking them back to their own paddock. I led Richie over to the water and he took a couple of sips. We hung out for a while until I had to go back home. I took a big broccoli plant over to them the following day which was gobbled up by Rej and Rich.

I had an idea about buying a ball to see if they’d play with it, so I took that in with me and surprisingly, Richie mashed his head into it and rolled it around with his forehead a few times! Like an idiot, I didn’t have my phone. I’ll take it next time and get a video. The lamb didn’t know what it was so he just ignored it. Fun times on the farm!

4 thoughts on “Time to Shear the Sheep”