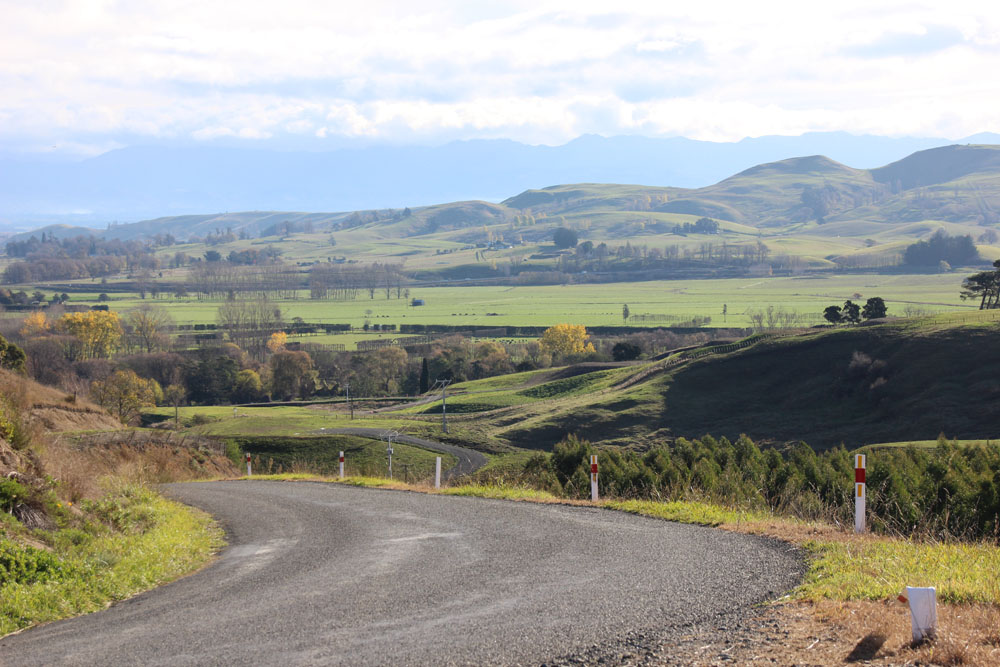 Not to be confused with my last post about Mangarara Station, we took Mangatarata Road until it dead ended yesterday. My grandfather used to love doing “Sunday” drives, even if they weren’t on a Sunday and seeing where he would end up. It was a beautiful day after a wild month of gale force winds, heavy rain and light freezes.

Because it was near the spot where we found a frog on a trail (which we never went down before), I thought we could go look for one (or more) again. The first critter I came across was a ladybug (or “ladybird” as they call them here). People say the Harlequin ladybirds are BAD, very BAD and to squish them if you find any. They prey on our native ladybirds and we should try to save any natives when we can. However, sometimes Harlequins can be difficult to compare to natives as they have a variety of colors to them. I won’t crush them, but I will take photos!

This one was climbing on the rail over the stream along with its buddy. Little did we know that soon, they would be everywhere! Including all over Andy. He held some on his finger while I took photos and they may be small, but he flinched when it bit him! Who knew!?

He was staring at something up the path from me and when I asked what it was he said, “Shiny beetle.” I heard about 3 different things besides that in his Welsh accent before he had to point it out to me. He obviously wasn’t even aware he was getting covered in them.

Something about white, I think. I was dressed in a dark grey top and blue jeans and they weren’t on me. There were no signs of any frogs. The creek runs pretty close to the path until it starts to head uphill to the right and on the left is a large clearing. As we walked that way, I noticed a tree had a huge branch that broke off from the trunk. Obviously it was from last week when the gale winds were hitting 160 km/h (99 mph) on the plains and what felt like, down our street. There were fallen trees all over. Needless to say, my garden wasn’t in the best shape either.

Carrying on up the hill and looking down at the creek, I caught sight of a Pukeko! I can rarely get close shots of those but I meandered down the hill in flattened long grass while it kept a keen eye on me. It hid in a hole for a while but I stood there quietly until it came back out again. Skittish, those things!

Carrying on back the way we came were some lamb ears (not REAL lamb ears!). The plants are aptly named beacause of their shape and feel. This one had a small daddy longlegs spider near it. The leaves were heavy with morning dew, almost appearing as frost.

After picking all the ladybugs off of Andy, we got in the car to go up the long country road and see where it ended up. It was a dead end, as it said on the sign, but we didn’t take it all the way down last time.

This was just about at the top of the hill where a mountain bike trail starts. I would loved to have walked it but afraid it might not be allowed. Plus, the walk back up the hill looked tiring.

As we started to crest a hill, a bunch of cows on the left side were crowded together and one appeared to be on the road or very close to it.

It’s so funny how a tiny little “fence” can keep these huge beasts contained. I wonder if one got brave enough to try and get out of it, if they’d remember from then on?

While there were a bunch of Kingfishers on the telephone lines, I didn’t catch a photo, but I do have this one from the other day near my house.

Finally, we descended upon a couple of houses and that was the end of the road.

We turned around and headed back from whence we came and spotted a pretty magpie in the trees.

The final image of the trip was following this hawk and “sneaking up” on it in the car. Oh, there was no sneaking, he was well aware of us and stared me down as I took his or her picture.

A lovely day for a Sunday drive that grandpa would’ve liked, too. He was with us in spirit.

For my birthday this year, we’re heading to the great Tongariro National Park in the middle of the North Island for some amazing walks and shots of the volcano and hopefully, some starry Milky Way photos, too.

Have a safe Memorial Day weekend, you folks in the U.S. and thanks to all of the brave men and women who fought for our country.