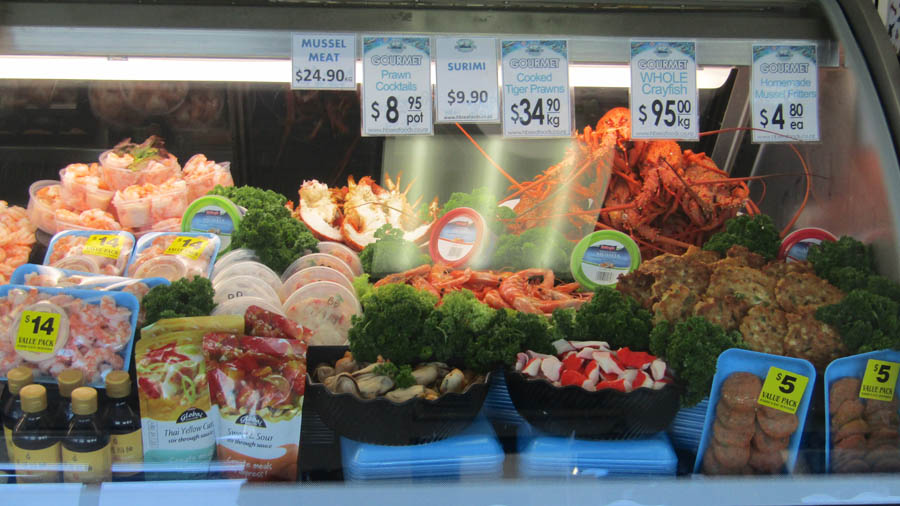 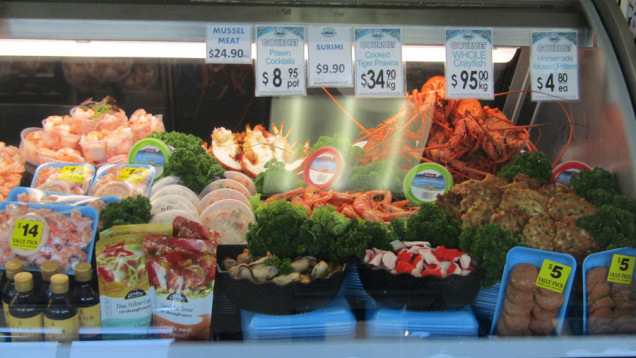 In my quest for clam meat that I don’t have to buy in a can from the American store in Auckland, I came across Hawke’s Bay Seafoods website one day. I was actually overwhelmed at the amount of different types they offered. Razor, moon, cloudy, tua tua, and frozen chopped clams. The clams I AM able to find come in a shell, vacuum packed and cost a LOT of money. Having never even shucked a clam before, I couldn’t imagine that the few clams in that bag would even be found in a pot of clam chowder.

I perused the options on their site and found that the razor clams seemed to be the best deal and I’d get 2 pounds of them for around $25. SOLD to the lady with the Old Bay Seasoning! Since shipping was reasonable, I figured I’d look for some more things. Low and behold….ON SALE was a huge bag of HEADLESS (finally), deveined and de-tailed (is that a word?) frozen shrimp. I could even choose the size of shrimp I wanted. Again, a fantastic price around the same as the clams. I couldn’t WAIT for my order to show up!!

My order arrived the next day and I put it all in the freezer until I needed them. I was really thrilled at the amount of clams in the bag and the prawns were big and meaty. I felt RICH!

Knowing pretty much nothing about clams in their natural state, I let these babies thaw out and then realized that was a SHELL on them! Here I was thinking I’d have a ton of meat if I cut these into small pieces. Hah…what a dummy I am. So I dug out the meat which still yielded a fair amount, but it did take some work. Ok, lesson learned. By the way, the chowder turned out great.

I had emailed into HB Seafoods with unsolicited advice on some errors on their website. After hearing from Adam in Customer Support, who was more than happy to have me send in some corrections, also invited me to come by for a tour next time I was in the neighborhood. I was totally down with that and met up with him last week when I went to Napier.

HBS (as I’ll call it from now on) has a nice shop on the corner selling fresh seafood and also has a takeaway counter. The outfit looked pretty large and I wasn’t sure where to go, so I started there. He pointed me over to a two storey building next door and I popped into reception and met up with Adam. 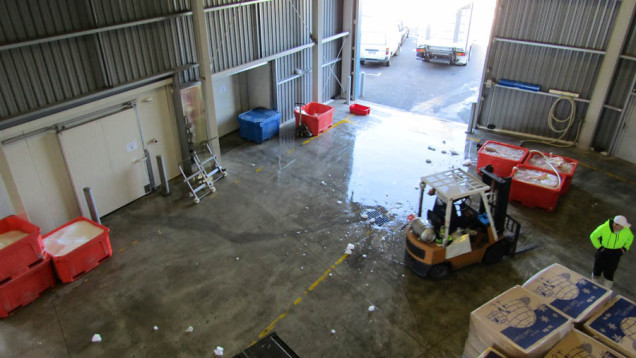 He showed me out to the balcony where we could see their fleet of boats in the port (unfortunately I didn’t get a photo of that) and then around the nice, modern office space. On the other side of the building, we could peer down into the receiving bay and he pointed out the huge coolers full of seafood that could find themselves in Japan in a couple of days.

Adam told me how HBS started off in a very small section of this street corner they were on and grew into this huge outfit today. We dove right in as I watched large containers of fish sloshing around on a forklift below. Downstairs we went and he took me by the chiller room.

I really should’ve gotten a photo of me with “smoke” coming out of my mouth when he pulled back the heavy plastic curtain that kept the cold contained in there. WHOA…this is not a place you’d want to stick your tongue on anything…you’d never get it off of there. I swear if I would’ve thrown a glass of water up in the air, it would’ve frozen before it hit the floor. Brrrrrrrr.

We then went into a room where bins of fresh fish were awaiting the cutting board for their internet orders. They had a handful of folks working in the back, filleting fish and packing up orders to ship out that day. 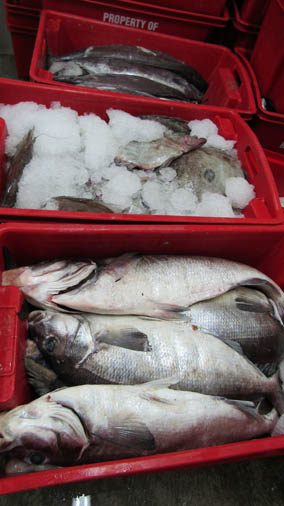 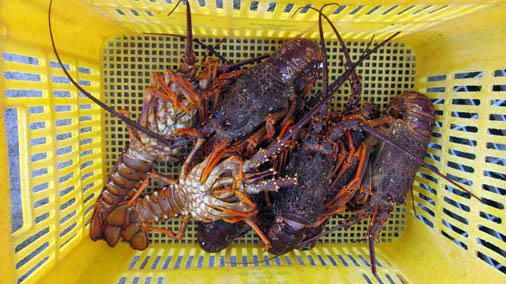 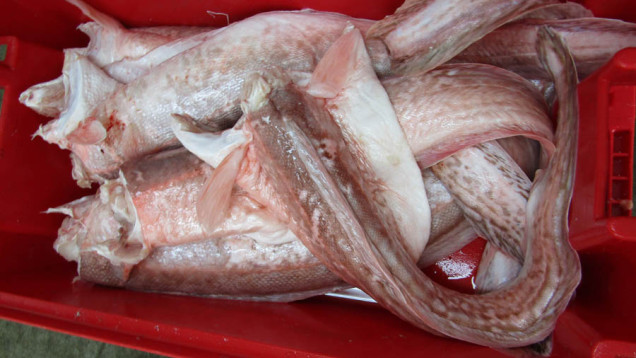 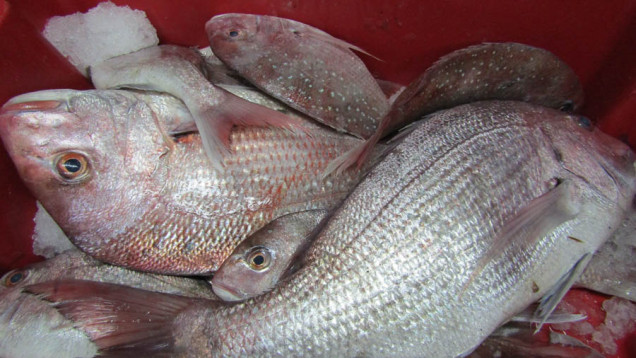 Then I got to see the shellfish room! A huge tank of crayfish bubbled away while some clams hung out in calm water next to them. 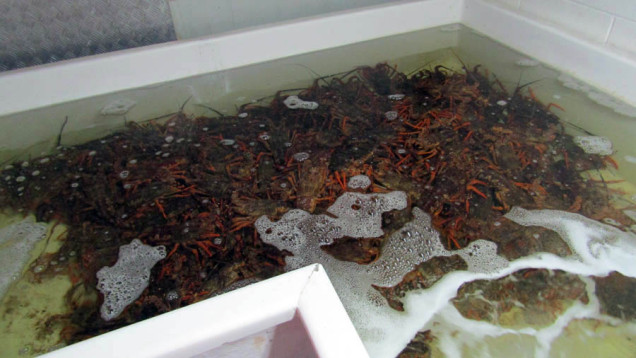 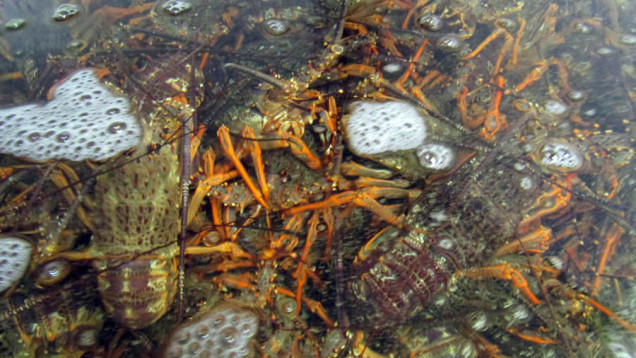 I asked why those crayfish were always so expensive here ($95/kg) and he explained it was due to all of the overhead costs of sending out the boat, paying the fishermen and still trying to make a marginal profit. They don’t have trouble selling them, though. Often they’re consumed on special occasions or by visitors to New Zealand who like to indulge on things they don’t get back home. 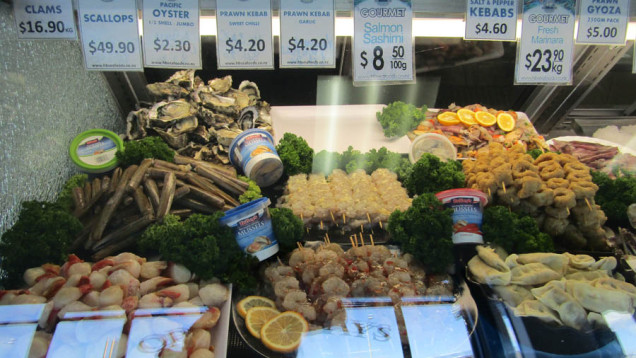 We walked over to the shop where I got to have a better look at the cabinet (hey, there are those clams up there!) and told me that people could purchase their fresh seafood and also have it cooked to their liking on the spot!

This got us talking about preparing seafood and he generously offered up some fish for me to take home. I admitted I wasn’t a huge fan of fish and I didn’t really even know how to cook it. When I had bought fish, it was either to make ceviche or give to my snakes. So we went back to the cooler where those bins of fish were and he picked up two large trevally’s. 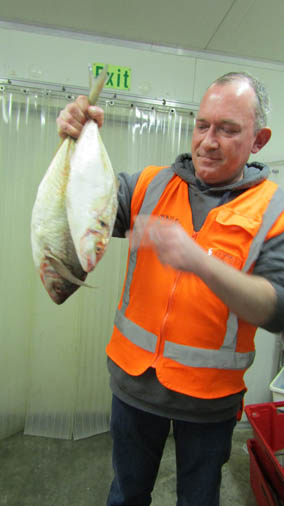 He reminded me that these were still swimming last night (then I felt kinda bad). We walked back to the processing room and had his pro cutter fillet these for me. 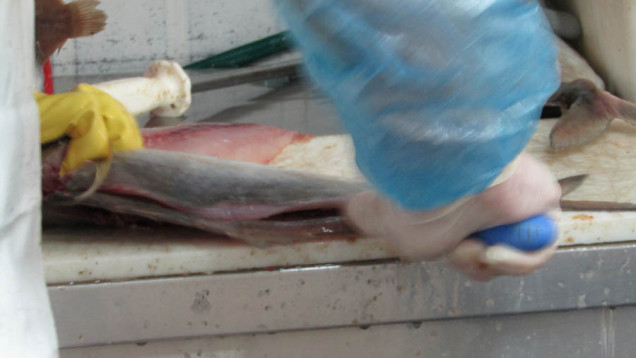 Having already forgotten the name of the fish, I asked again and then joked that it sounded like an Italian guy’s last name. So I kept repeating ‘Tony Trevally’ in my head on the drive home so I wouldn’t forget.

In less time than it would take to sing a Sinatra song, my fish was wrapped up and put in a chilly bin for the drive home! I told him I’d give ceviche a go and let him know how it turned out. 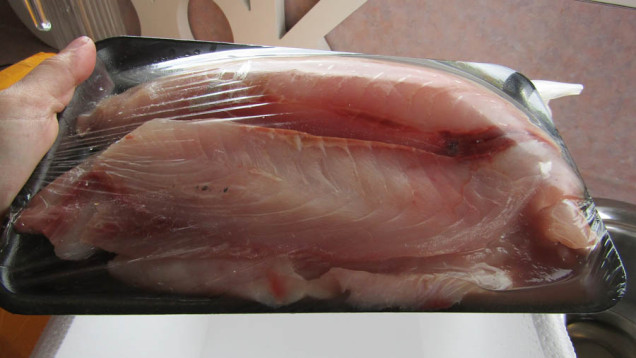 Thanks for the memories, Adam! The fish was really good and here’s how I prepared it… 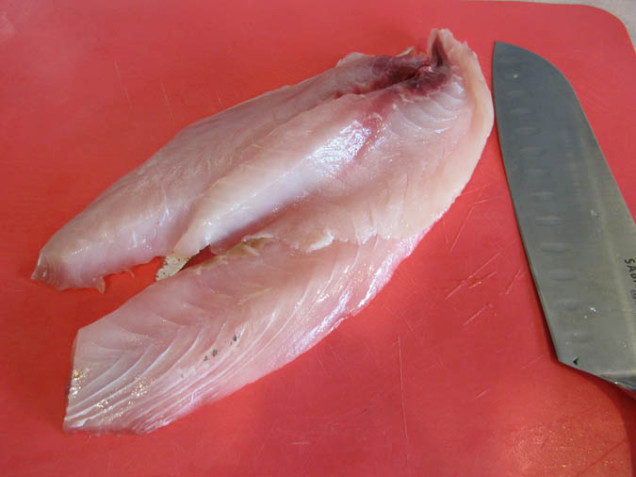 Simply put, I love ceviche, but it’s usually reserved for when I go to the Caribbean. I had eaten some lionfish ceviche when I was in Belize last and it was time to make my own now.

Ceviche is a method of cooking seafood in a citrus juice, such as lime. The acids in the juice work to literally “cook” the fish and you eat it cold. Some of the main ingredients in ceviche would be onion, jalapeno or some fiery pepper, tomato, salt, pepper and cilantro. I perused some recipes out there since it’d been a while and threw in some finely grated garlic using my planer and incorporated a bit of orange juice in with the lime. I also added cucumber since I failed to get any avocado and read that if you heavily salt the onion, it leaches out the water and makes it less bitter, so I did that.

I used the smaller fillet, which was still a ton and chopped it into small bite sized pieces, then put into a large bowl. 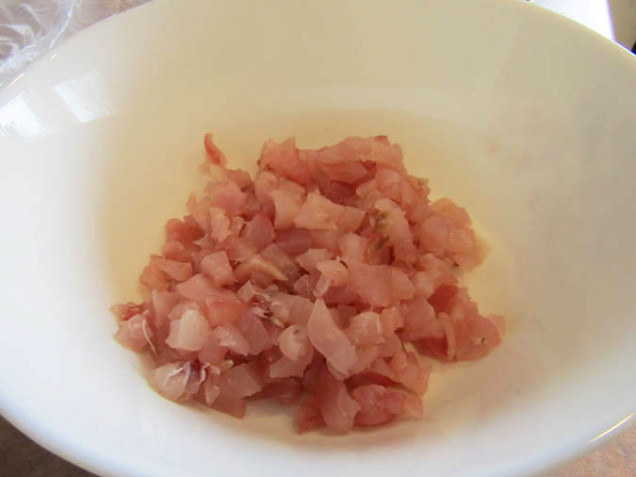 Then I threw in all of the veggies and covered it with the juice. 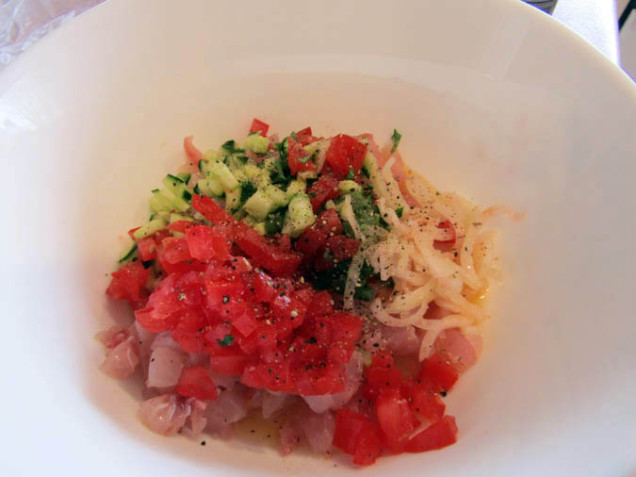 Stir it up well and let the magic happen. 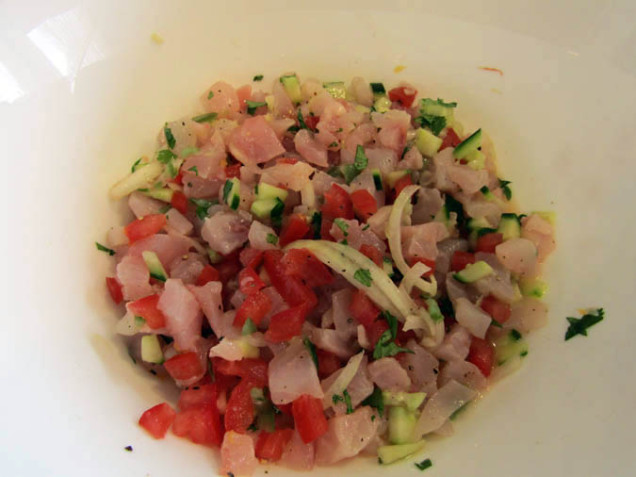 Now, what everyone said in their recipe was to wait 30 minutes for it to “cook” and you should be good to go. Well, I don’t know what the problem was this time. Whether it was the fact that I bought NZ limes and they let them go yellow before they sell them or if it was because I had it in the fridge, but it literally took FOREVER before the fish was done.

Not even close at 30 minutes. I knew to stir it up so everything got coated with the lime and also knew it was best to be mostly submerged in it to cook evenly, so I pressed it flatter and stirred every 20 minutes or so.

The magic was working, albeit it very sloooooowly.

It was pretty much done by dinner time, when I had already made something else entirely! You can still see some raw parts so I just picked out the pieces that were done and had them with corn chips as an appetizer. The takeaway here: don’t count on a specific amount of time…eat it when it has turned white. It was really good…I couldn’t wait until (breakfast?) the following day and put them on corn tortillas for some fish tacos! 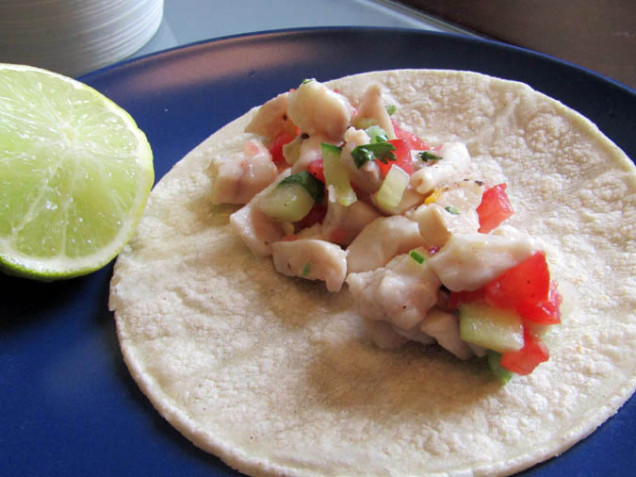 As I had been drifting off to sleep, I realized I wanted to drain most of the juice so it wouldn’t be a huge bowl of fishy mush by morning but I couldn’t be bothered to get out of bed.

Morning arrived and it was the first thing I did and it seemed to be just fine. For lunch, I heated some nice corn tortillas up and made tacos. I couldn’t believe how much I had in that bowl and felt like I was back in the tropics again! My boyfriend, who can’t stomach the idea of eating cold fish, left it all for me to have and it was even fine the day after that as well.

So thank you, Adam, for introducing me to the Trevally family. I froze the other large fillet so I may end up baking or pan frying it. By the way, the website is looking great…kudos to your team over there!

0 thoughts on “A Tour of Hawke’s Bay Seafoods”