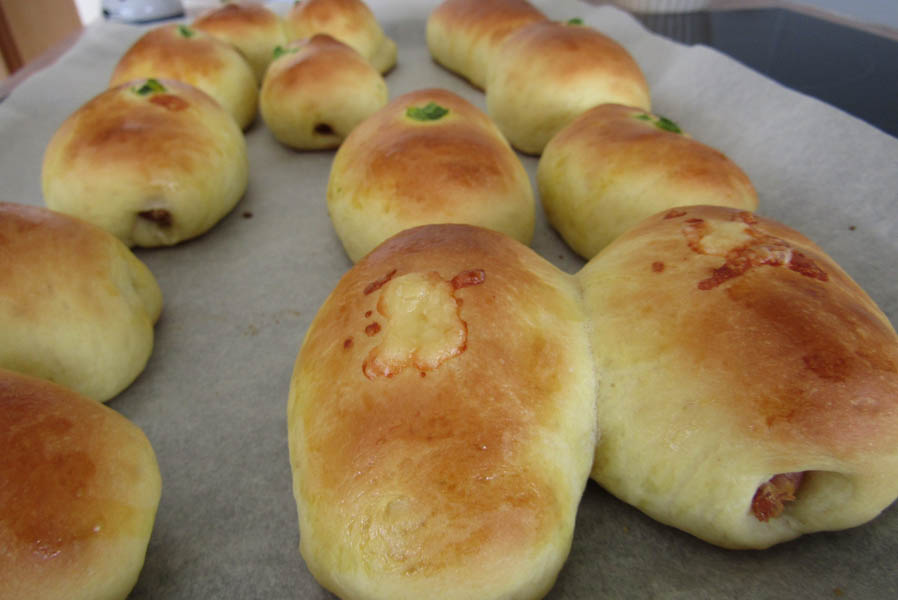 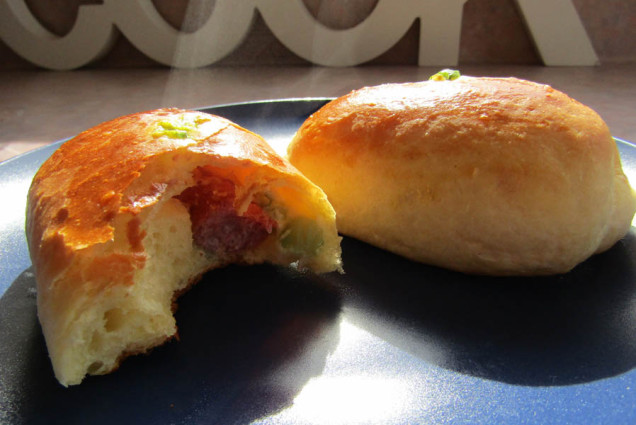 I’m not sure what got me on the subject, but when I was in the States recently, I failed to eat any kolaches. For those who have no idea what I’m talking about, these are sausages with various fillings (or none at all) wrapped in a sweet dough, introduced to Texas by Czech immigrants (and we thank them for that).

Just about any bakery or doughnut shop will have these and almost anyone will gladly accept one or two when they’re brought into the office to share. My favorite was jalapeno and cheese. I would pick one up at a bakery I’d frequent on the way to work once or twice a week. When I started gaining weight, I knew what to blame (it never occurred to me that could REALLY happen). I had to cut back. They were pretty huge sausages in there and mighty greasy but boy, did they go down easy and kept me from getting hungry for lunch 6 hours later.

Oh, I know what got me on this kick…I made my boyfriend an omelette with chorizo in it and that’s what reminded me of kolaches. I searched a few places for a recipe and they all looked involved and messy. One suggested using Crisco (which we don’t have here) so I bought some from the American store (a one pounder for $8.50nzd), which I didn’t even use. Found another recipe using butter which appealed to me more. Of course, this came from the Homesick Texan site, which I’ve frequented in the past. 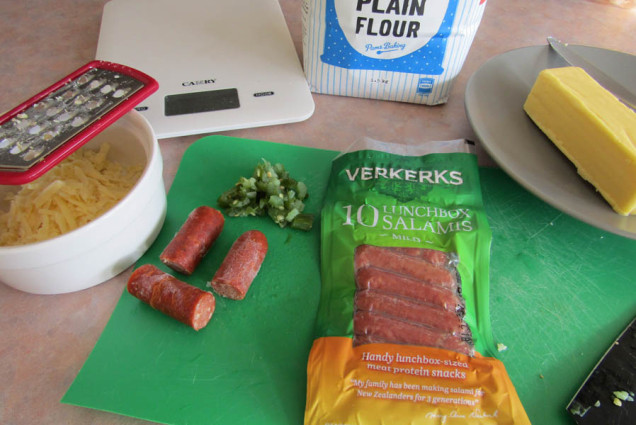 Anyway, there was a small package of sausages which were NOT chorizo, but thought they were as close as I could get to ‘Lil Smokeys (also not here). Seeing that the recipe was going to make quite a few, I cut up one of the chorizo sausages into 3 pieces (I’ll probably regret not doing more) and set off to work.

The first part wasn’t so bad…simply mix together warm milk, sugar, a bit of flour and yeast, then let it rise until doubled, which happened just like it said it would. In the meantime, I cut up some jalapenos and grated some cheddar cheese.

Now the fun part, which was to stand there with a mixer for 20 MINUTES. No way….I have a hand mixer and I just didn’t see this happening. I’m extremely lazy when it comes to making dough of any kind. I hand mixed the rising dough with eggs, butter and salt until it was ready to be given over to the mixer. Dough hooks attached, I checked the time. It was 18 after. I added some flour, mixed and mixed then tested the tackiness of the stuff. When it stuck to my finger, I added a bit more flour….then a bit more…then more again.

It was becoming ‘pillowy’ as it said it would and no longer stuck to my finger. They said, ‘Do the windowpane test,’ which involved taking a little bit of dough and stretching it until you could see daylight through it without it breaking. Well, good enough for me. The clock now read 32 after. Amazing. 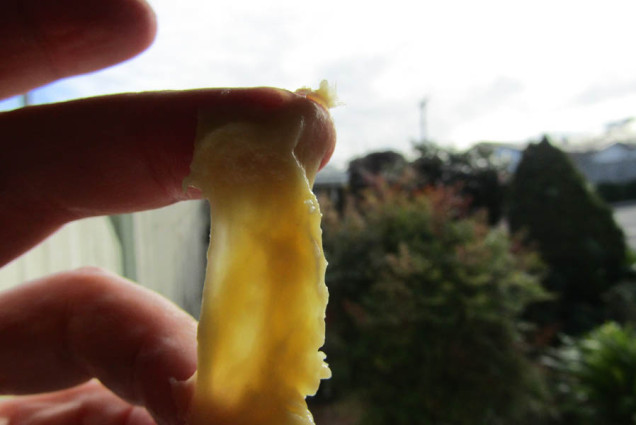 Let’s see if we can find yet ANOTHER bowl to oil up and put this doughy beauty inside of. As that did its thing, it said to fry up those sausages in a bit of olive oil and drain. Well, folks, this isn’t the prettiest sight, I’ll admit. Thankfully they’ll be hidden in some yeasty, sweet bread!

Sure enough, the dough rose nicely and as I formed them into rectangles (instead of triangles since that seemed like way too much work), the dough was indeed pillowy and due to all of the butter, didn’t stick to my fingers AT ALL.

I managed to use about half of the dough and all of the sausages which filled up the pan. 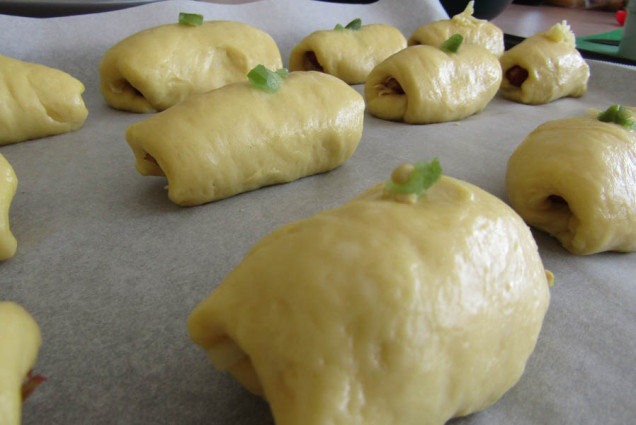 In my infinite wisdom, I thought I could do some fruit ones with the leftover dough so got out the brambleberry and boysenberry jams and did another pan with those (with a couple left plain to turn into rolls). 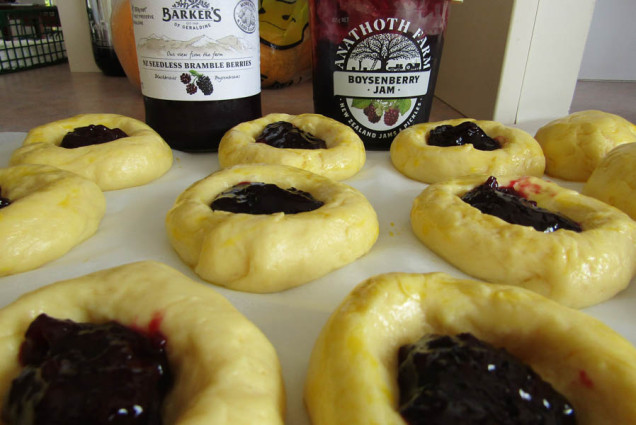 The moment of truth was 15 minutes away. The kitchen started getting that yeasty, bakery smell and the little guys looked great in the oven! Puffing up and turning brown on top due to the egg wash they got. 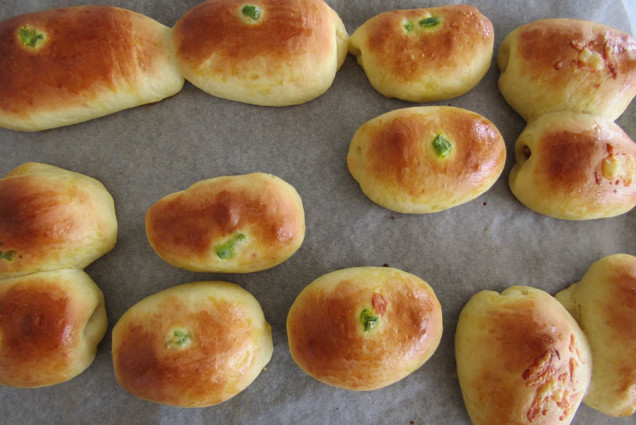 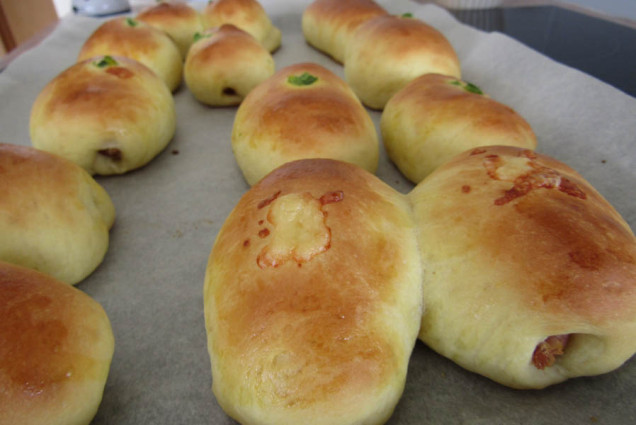 And what, only 3 hours later, I’m happy to report that this homesick Texan is happy with the sausage kolaches and stuffing my face as I write. The dough turned out perfectly light, slightly sweet and tender. Now the sausages could use some work…I haven’t found the chorizo ones yet, but hey…this is progress! Not to mention, lunch.

By the way, my boyfriend came home from work and picked out two of the three that had chorizo in them! How’d he do that?? They were much spicier and didn’t even need jalapeno in them. I think I’ll stick with that if I ever summon up the energy to make these again.

I think Kiwi’s would probably go nuts over these, being such sausage fans. If only my bakery guy was still in business! Maybe one day I’ll finally open that bakery I’ve always dreamt of. Although the hours turn me off. I’m a danger to myself and others before 10am. 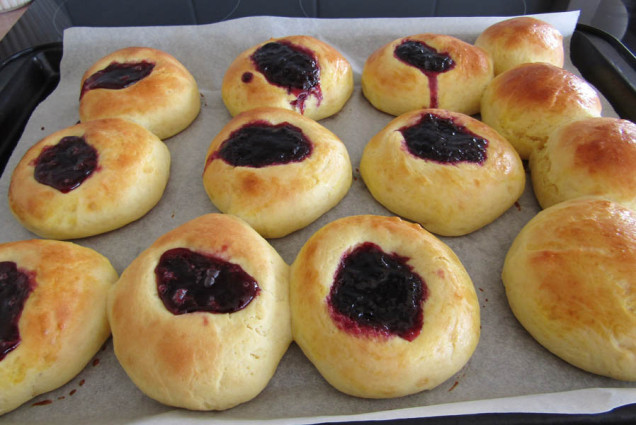 Well, it’s now time for dessert! These came out pretty well, too. I took a few to my Kiwi neighbor to see her reaction. I caught her as she was home for lunch and about to stuff a lamington in her mouth. She put it back and tried the sausage kolache. I got the seal of approval from her, so that’s promising.

The bonus is that the house smells great now. I’m willing to bet there will be 1 or 2 left by tomorrow morning. This isn’t something I’ll be making often, but glad I did. I guess another batch of flour tortillas are in order which is another 3 hours of labor for not much reward. Once again, you guys in Texas are seriously blessed (and don’t you forget it!!!). 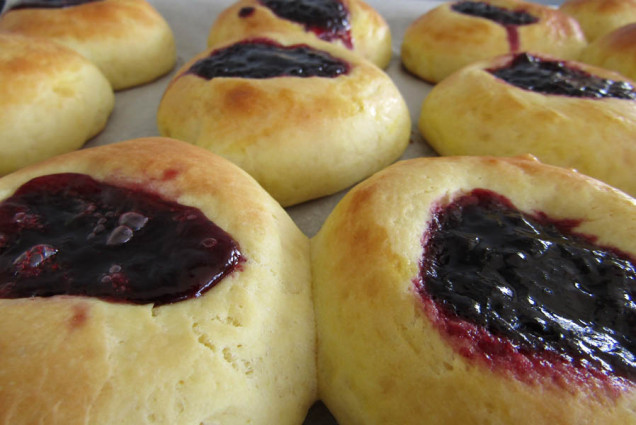 15 thoughts on “A Taste of Home – South Texas Kolaches”