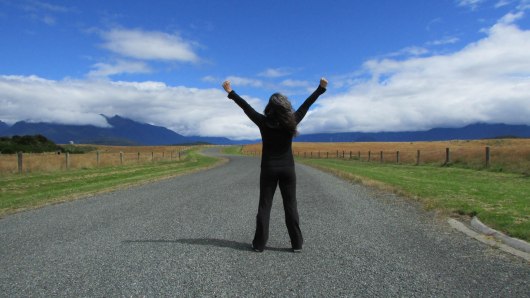 I remember like it was yesterday. I sat on the front porch that night looking at the stars, knowing there was nothing inside of my house except the bags I packed to take on the plane. I had accomplished everything I had set out to do: sold the house, the cars and every single possession I owned. I had only 12 more hours in the United States before heading off to Costa Rica to begin my new life abroad. My 15 year dream was finally coming true and it felt so liberating, albeit uncertain at the same time.

It doesn’t seem like it was two years ago that I stayed in that hot, buggy casita in Cocles. A lot happened during those three months. I learned how to take care of monkeys and sloths; I encountered wildlife beyond my wildest imagination; I lived without mod cons; I ate healthier but became ill due to the water; I got in shape by walking or riding my bike everywhere and I met people that I’m still friends with today.

There were days when I felt broken but swore to never give in. Then there were days of pure bliss, like riding my bike to a beautiful beach and having chocolate fondue for lunch. Without a care in the world and nothing to have to rush home for, I knew I had made a good decision to follow my heart to Costa Rica.

The long term house sit in Turrialba was magnificent with an abundance of wildlife in my own yard. I loved taking the machete through the pathways and slashing unruly vines and yellowing banana leaves. I chopped up the felled twisted branches of the rainbow eucalyptus tree to put in the fireplace during chilly nights. I would beam with happiness as I came across grapefruit trees in the village and carried home the heavy fruit in a plastic bag. I revived beautiful birds that slammed into the windows and ate bananas straight off the trees. Best of all, I think, was being the only expat and having to practice my Spanish almost everyday. The people there were genuine and kind.

Having always wanted to visit Panama, it was my next move. There, I lived in the beautiful little town of El Valle, nestled in a crater of an extinct volcano. I helped launch a tourist attraction and learned how to raise butterflies. I felt more than ever like a mother to all of those babies. From egg to caterpillar to butterfly, I had my hands full everyday. On my days off, I still couldn’t keep away from them and found myself, like a mother, constantly worried about their well being. I would personally care for butterflies that had malformed wings and couldn’t fly. The butterflies in the flight house always got breakfast before I did and I took great pleasure in making sure they were happy.

After leaving Panama, I made the decision to travel half way around the world to New Zealand. A beautiful country on many peoples’ bucket list, I was happy to finally see it for myself. My new found lack of planning didn’t prepare me for the harsh winter ahead near the bottom of the South Island. Not realizing I could practically blow a kiss to Antarctica, I had a hard time adjusting after coming from the tropics. Working outside most of the day on a sheep farm was a complete turnaround from what I had ever imagined doing. Living with a family after being on my own for so long took some adjustment, but it was good for me. It forced me out of my comfort zone and prepared me for future stays with complete strangers in their homes instead of opting for impersonal and expensive hotel rooms.

When my visa was up, I went to Australia where the heat overwhelmed me. Everyone said it would be hot but I didn’t expect it would take so long to adjust to the new climate. People wouldn’t use their air con even though they had it and the convenience of a dishwasher was usually shunned as well. I was back to doing dishes by hand but living in nicer homes than Central America. I missed not having an open air house and tangible items were readily available at nearby shops. I found myself longing for challenges. I realized that it had been good for me to not always have what I wanted. I didn’t want life to be this easy. I had enjoyed not having a car and buying fruits and vegetables from roadside vendors. My heart belonged in Central America. I felt out of place on this side of the world.

I will be spending my two year anniversary in the Marlborough region of New Zealand. A beautiful grape growing area that reminds me of my life back in the tropics. There are fruit trees of all varieties in every yard it seems and the weather is typically pleasant and sunny. The rolling fields of grapevines imply a certain peacefulness that makes me smile every time I pass by them. The many rivers, mountains and beaches are all nearby and never crowded. You can let your dog run free and watch the ever changing sky over the endless sea.

I have been changed by the people I met on my travels, something which would’ve never happened had I not left my old life behind. I have affected the lives of others as well, sometimes not for the better. With every new encounter, I learn, I grow and I evolve. I am embracing the ebb and flow of change instead of being satisfied with the stagnation of habit and conformity. As Camille has said, I am forever changed and I look forward to more years of eye opening experiences and cultural exchanges around the world.

0 thoughts on “Two Years and Counting”