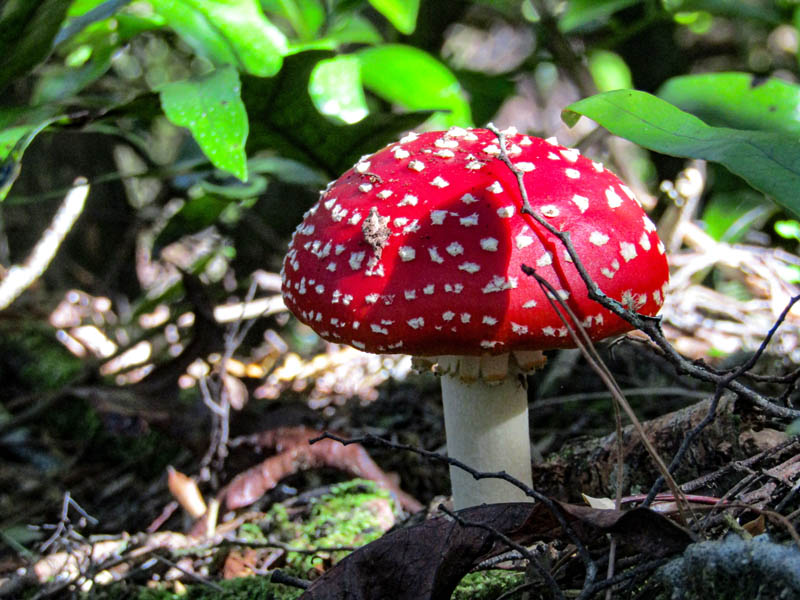 It had been a while since we had been out…between the floods and us contracting covid, it was finally a nice fall day to visit one of our go-to nature reserves. Actually, two…first was Monckton Reserve then a’deane’s bush.

Soon into the walk, along the left side of the path, the sun shone onto the ground and I noticed a lot of mushrooms had popped up. My favorite…the Alice in Wonderland kind of mushrooms called Amanita muscaria or the fly agaric mushroom.

These are hallucinogenic in nature and while people will say they’ll kill you, my research revealed there had not been any “reliably” reported deaths in the past 100 years. They’ll still poison you, and you might WISH you were dead. I wouldn’t go chomping on these things if I were you.

I tried to get the undersides of all the mushrooms we came across to see exactly what was going on under there. These particular mushrooms had also been used in the past to kill flies! Hence their name (musca meaning “fly” in Latin). They would powder these in milk to kill them.

I had always assumed the white specks on top were the skin peeling back but upon closer inspection, it looks like moss. I read though that it’s part of the skin that covered the mushroom as it was growing and just “outgrew” it and stuck to it. It apparently comes off when it rains. There were many of these (they tend to grow under pines) in varying states of growth. One huge one (at least 12″ in diameter) had fallen over.

Unbeknownst to me, there were more to come during our walk!

I see these all the time. Big, chunky ones growing out of the side of trees. It doesn’t look like a healthy growth to me and researching it today, it’s probably true. Laetiporus portentosus (pūtawa) feed on the wood of beech trees. Māori would use them to cover wounds or for fire. They don’t have gills beneath them and can grow quite large.

I see these all the time and think it’s a turkey tail porebracket. They remind me of bacon. Yum!

Oh, here’s another one of those red mushrooms but more of a yellow color (getting older?).

I want to say these are some kind of oyster mushroom, but not positive. They were frilly and delicate and probably highly prized if they were. I’m not into picking wild mushrooms so all of these stayed put!

These cuties just looked like tiny round puffs until you get in close with the camera. What a neat little world down there!

Taking the time to look up once in a while, I noticed this spider web with a rainbow of colors on it as the sun hit it.

I love these trees with their neat bark, too.

This little guy didn’t appear to be the same kind of mushroom as the previous ones. Looked dangerous.

This funny little plant stood out and I aptly named it the helicopter tree. Makes you wonder how or why it evolved like that? I have a couple popping up under the grapefruit tree that are similar. Strange things.

I believe this is an edible ‘pukurau’ mushroom which is what my town of Waipukurau was named after!

On the way out there were some magpies hanging out and I got a photo of this one between branches.

And just like that, our two mile walk was over. I’m trying to get us in some kind of shape before heading off to Fiji next month, where we will no doubt be trekking, climbing and aching on a daily basis. I did promise there would be no more hiking to see waterfalls though. So the next post you read will be about the (warm) tropics and hopefully some great underwater pictures of pristine reefs and creatures!

7 thoughts on “A Fungus Filled Day”