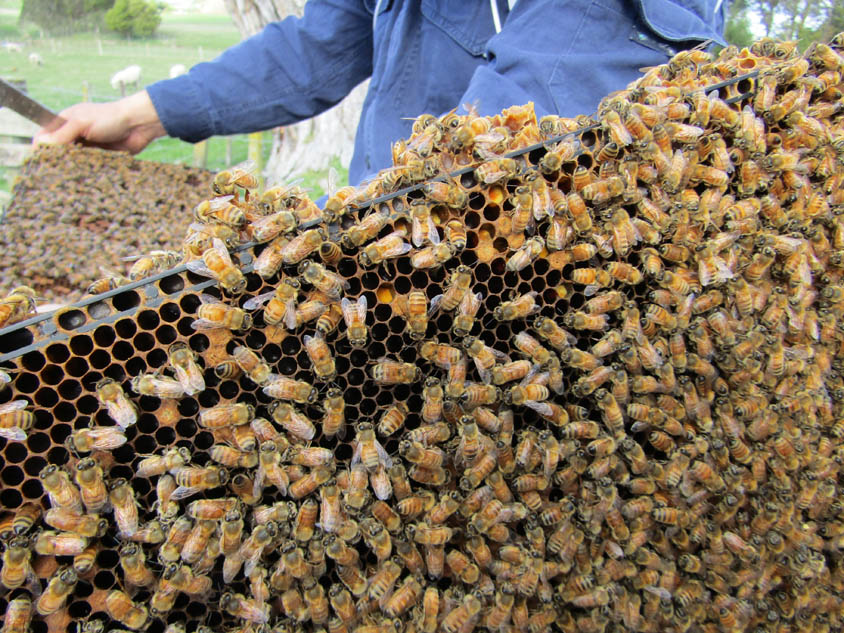 This month we finally got to see inside a beehive and don some suits. Because of the class size, we went in two groups (there are two hives onsite) to see what was going on. The goal of this visit was to check the brood and see how well the hives were performing since setting them out a couple weeks prior.

The first task was to get the smoker going to calm the bees when the hive gets opened.

He cracked open the lid, unsticking the propolis the bees had tacked onto parts of it and started to separate the frames to bring them out in the open. It was amazingly calm and not a single bee had even landed on me that I could tell.

Here you can see where they’ve packed some yummy pollen into some cells.

This shot you can see the queen about in the middle with the longer body and short looking wings. He said this colony looked really good, but the other one was “exceptional.”

Finally, he placed a pollen patty on the top for them to eat as a supplement to boost brood production (baby bees). It’s not made of pollen but it’s a good substitute and he said we’d be making some soon. They are also commercially available for purchase.

One little bee got squished when he was putting the box back on which made me feel bad…I don’t care that there are 50,000 others! Every bee life matters to me!

The following week, we headed out to Buzzy’s to feed some syrup to the hives and plant a bunch of flax, bushes and trees. Buzzy has an acre property about 10 minutes from town and agreed to host us out there so he really scored by getting all of these plants from the school! Even manuka!

You can see the thick 1:1 blend of sugar and warm water being poured into the top feeder. This gives the bees a little extra food and help in the early Spring.

Planting along the fence line sure went fast with 9 or 10 people helping! He’ll have gorgeous hebe bushes which produce clustered flowers and bloom for a long time. The manuka will only bloom for about a month, but it’s a nice blend to have in the honey. They also planted flax which is another good source of food and some rosemary which is a long bloomer and mini kowhai trees (which the Tui’s love).

I started writing this post a few weeks ago and in between that time, I’ve had some new information come my way as well as some other information which has started to sink in.

People not privy to all of the things that actually happen when keeping bees are pretty horrified to find out when I tell them. This one particular thing has become a moral dilemma for me, which I’m not able to follow through on, should it happen.

Bees are susceptible to a disease called AFB (American Foul Brood) which attacks and kills bees as they start forming in the cell. Should you be unlucky enough to get this in your hive, you are REQUIRED to burn the bees and the hive to keep it from spreading.

This involves trapping the bees inside the hive so they cannot escape, opening the lid a bit to pour fuel inside of it in the “hopes” of killing the bees with the fumes and then lighting it on fire in a pit you have dug in the ground then burying it all.

I’ve watched videos of this and I’ve seen bees flying out of the hive while the fire is blazing. This, my friends, I cannot deal with. Where I come from, that would be considered abuse and that’s the last thing I’m going to do. I had a hard enough time putting down a pet much less killing 40,000 creatures that I was responsible for.

The other thing that disgusts me is learning that commercial beekeepers take all of the honey away from the bees before winter, which they NEED to survive off of since they cannot forage during this time with very little flowering plants available and the cold temperatures. Instead, they give them a substandard sugar water syrup which they still have to make into honey during this very vulnerable time of their lives when they should be concentrating on simply staying alive by keeping the hive warm.

I’m not down with that and would never want to work for an outfit that thinks so little about the creatures that pay their wages and work so hard to do it. It’s just cruel. They don’t even need to leave that much. Instead, they want to squeeze every penny out of it to line their pockets.

Honestly, the list goes on and on regarding the awful things that are done to bees so I won’t continue to bring you down with me. Just trust me when I say things aren’t pretty. Don’t even get me started with rooftop beehives in cities.

So with that sad ending, this will be the last of the beekeeping posts. I was looking forward to entertaining and educating you in this journey. I thought this would be a great skill to have under my belt and be able to do something with in the future. I find it terribly frustrating and heart wrenching…it hits me in a place that I never wanted to find out about. I can only hope that new beekeepers can read between the lines and search within themselves what feels right as well as considering the welfare of the bees. It seems that a lot of people just look upon them as disposable due to their sheer numbers and don’t matter.

So my question to you, dear reader….how does this make YOU feel?

4 thoughts on “Meet the Bees”