I’ve arrived at my new destination as of yesterday and started becoming acquainted with the folks that have so generously given me a place to live and their soon to be butterfly farm!

But first, a little backtracking on my last days in Costa Rica.  Yes, I was sad to leave and to have to ‘give the house back’ to the owners who came in a day before I left.  We had a nice lasagna dinner and conversation.  I walked the property with Paul so he could see how it changed and grew!  They are a lovely couple and I was so glad to have helped them as much as they helped me.  It was hard to say goodbye but like a shark, I must keep moving!

So I took the bus from Turri to San Jose and almost threw up a couple of times due to the fact I was seated by the window with only a view out the side which is never a good thing for me.  It was curvy, muggy, rainy and warm which is a bad combination for someone who battles motion sickness.  I’d never had a problem until that day.  The guy I was sitting next to spoke English and I asked if we could switch seats so I could see out the front.  The bus driver kept eyeing me, obviously he’d seen this look before.  I got out in Cartago (after the windy road and an hour into the trip) to get some air.  I hoped not to lose it in the trash can in front of the people on the street and in the bus.  I managed to hold it down.  Got some air and re-boarded.  Thankfully, I arrived to the bus station in half way decent condition where my friends came to pick me up.

I thought we’d have lunch but I was still full from breakfast and not in the mood for food.  So we went to a food court and Chalo ate, but Hanni and I didn’t.  It was a good way to kill time.  They’re a wonderful couple and the nicest people I met there.  I’m really going to miss them and hope to see them again sometime.

So the good news was that I realized I had bought a first class ticket to Panama!  YES!!!!  Love it when that happens.  Seat 1A baybeeee…my favorite.  Got a fairly decent meal, wine and before I knew it, we had landed.  Of course the luggage took FOREVER to get to us, and by that time the customs line was outrageous.  Anyway, after that all went well.  My ride was there, I got a nice historic tour on the way to Tryp Wyndham at Albrook mall from Thomas so that was nice.  And no, my caps lock is not stuck on…THE HOTEL ROCKED!!!!!!!!!!!!!!!!!  Wow…I wish I could have stayed there for a MONTH.

I hit it at the right time, after all the tourists had gone back home and I literally had the dining room at dinner to myself for crab cakes, the cafe for breakfast to myself and the tapas bar for dinner to myself (shrimp ceviche).  I love that.  Had a good conversation with the bar tender for over an hour in Spanish so yeah…I’m gettin’ there.  I had  a freaky coincidence of seeing my old friend in the mall whom I have NOT seen in at least 25 years now (he lives in Panama) so we caught up and then we met for breakfast the next morning in the mall as well.  Good to see him and catch up in person. 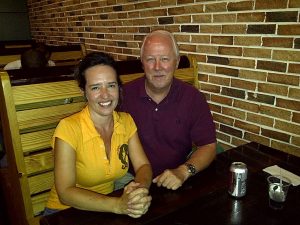 Then, before I knew it, I had to leave.  I met Jon and Linda nearby at a cafe after shopping extensively at the mall (which was attached to the hotel).  We did MORE mall shopping (wheeeeee!) but wasn’t able to find me a bike.  No worries…I’ll get one eventually.  It’s nice and flat in El Valle so I’m looking forward to getting one.  I got to do some grocery shopping which always makes me happy, especially HERE.  Food is cheap, more of a selection and I even got SHRIMP!!!!!!!  Wow.  I ate crab cakes and shrimp at the hotel (oh and two filet mignon’s for LUNCH).   Can’t leave out that Cinnabon for breakfast the last day because it’s been years since I’ve had one.  In food heaven.

So there was a wild rush trying to find things they need for the business and we didn’t get home until after dark.  I get this big house all to myself (pictures to come later) so for that I’m happy.  I went and bought some things today to make it a little more comfortable and fell back on my pasta dinner.  I went around town a bit today and got some knick knacks seeing that I don’t have to pay for rent or utilities.  I can splurge to try and make my living space more homey and comfortable.  Had lunch in town and bought some fruit.

I came back and Jon and I went into the flight room to collect eggs or caterpillars and Linda came back from the city with a box of pupae!

Three kinds.  Some had already emerged and were not looking good.  For the rest, we had to pin or hot glue them on cardboard and put them in their little boxes.  I get the joy of being the babysitter for them, as they’re in my house tonight!

It got creepy when they’d wiggle around inside there as we tried to pin or glue them…just odd.  Some look like dead leaves (those are the cool big owl butterflies) and some that look like Christmas lights or what I called little jalapeno’s.  They’re like little body snatcher pods but at the moment all are hanging out quite calmly.  But they will emerge into big beautiful butterflies and make us all happy!

Tomorrow we will work on many different things in order to get things up and running, so stay tuned, LOTS more to come 😉

Here are some more photos:

0 thoughts on “Babysitting Butterflies (to be)”