I’m here in Townsville, across the way from Magnetic Island for a couple of weeks and it’s a lot bigger than I thought it was! There are about 200,000 people here, along with 53 species of mammals, lots of snakes and lizards (my favorite!!) and over 365 species of birds. There are also dugongs (manatees), cassowaries and mahogany gliders (super cute gliding possum) which are all considered on the rare or endangered side. People do seem to love the animals here in Australia. Often taking them to some pretty outrageous sizes, like this spider outside of Reef HQ downtown. 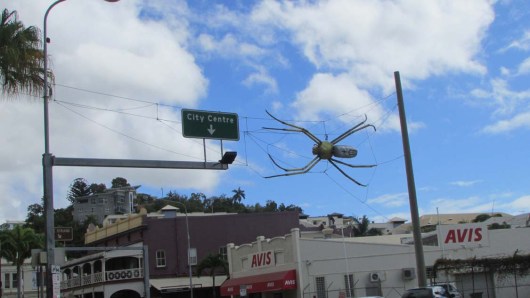 The house I’m in had a nice visitor the first time I came by (I named her Sylvia) and I had hoped she’d continue to come back but unfortunately she’s missing in action. She’s a carpet python which are very common to find around suburban areas. They help keep down the rat, mouse and possum populations. She was a big girl probably measuring no less than 4 1/2 feet. 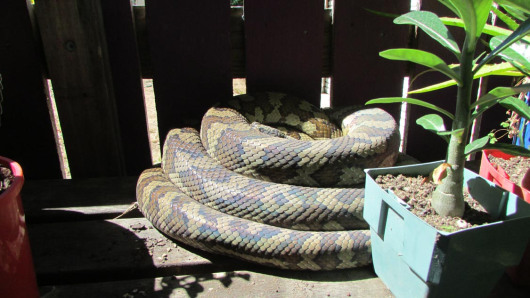 Another VERY cool critter I found on Magnetic, as well as here was the painted cray. It was the size of a lobster and had the most amazing colors. The ones I found here in Townsville weren’t as colorful, but nonetheless, spectacular in their own right.  I loved the zebra striped eyebrows too! 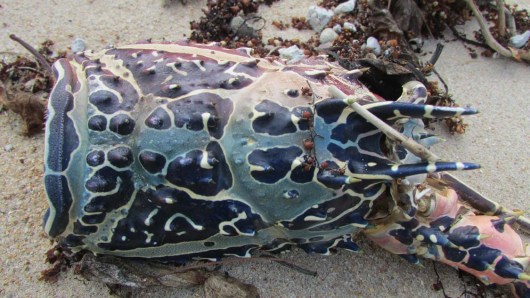 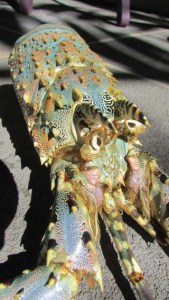 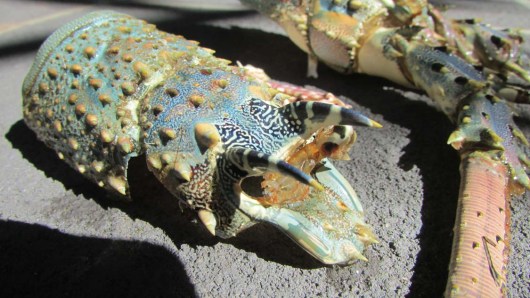 I also found this shark egg on Magnetic, which I had been looking for. Wonder who the little cutie was that hatched out of this thing!? It used to be a tiger shark nursery in Nelly Bay, which is where I found it. Although there are a lot of black tipped reef sharks seen in the area as well. Of course I had to smell it and although it was a tad “fishy”, it had a sort of orange or citrus scent to it as well. Weird. Conclusion: baby sharks smell pretty good. 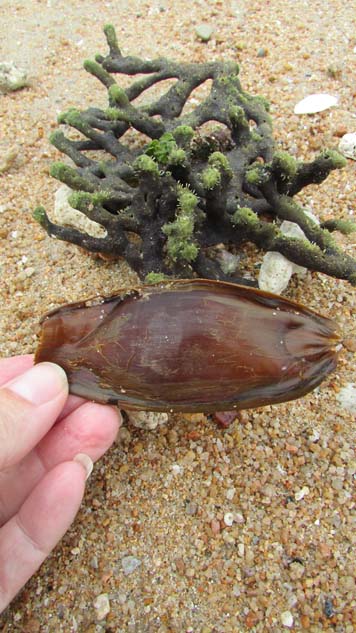 A wander around The Strand here always has interesting sights to take in. It’s a one mile long walkway that I’ve traversed a few times now. It stretches along the beachfront and has hotels, shops, parks with gas BBQ pits and public swimming pools. Because crocs have been seen along the beaches here and there are stingers (jellyfish) present during certain times of year, there are a couple of man made lagoons that fill with sea water that you can swim in. One of them is called the Rock Pool, which is free to enter and I visited it today and yesterday, although I didn’t get in. Since the beach was right there, I opted to lie on the sand instead. The water was too cold for me to get into (77F today). This is a view from Kissing Point overlooking the pool. 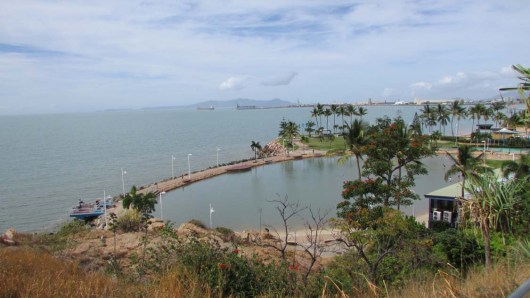 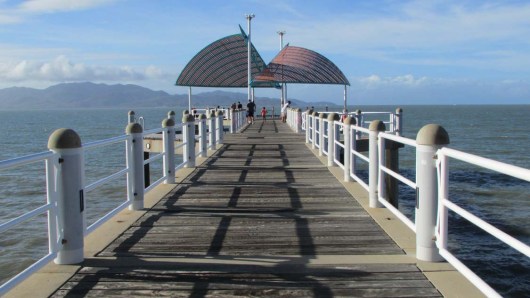 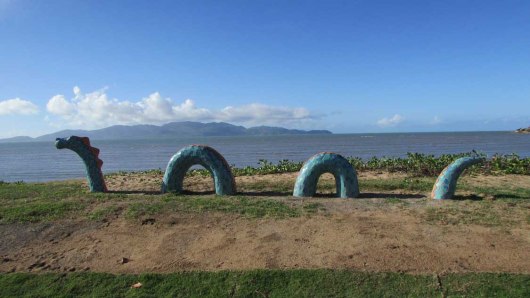 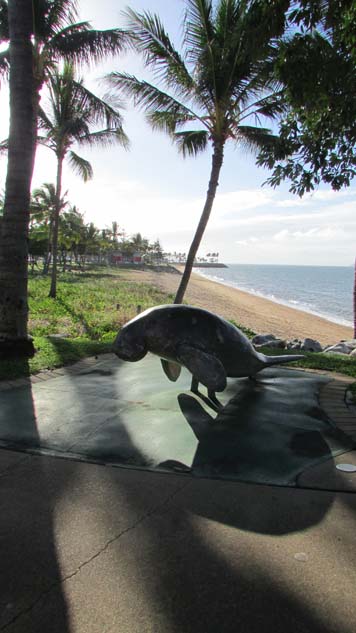 Speaking of stingers, the wide expanse of beach along the Strand has some signage talking about them and how to deal with certain ones you may come in contact with. 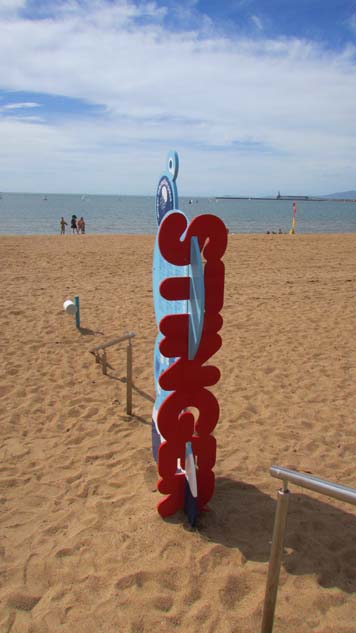 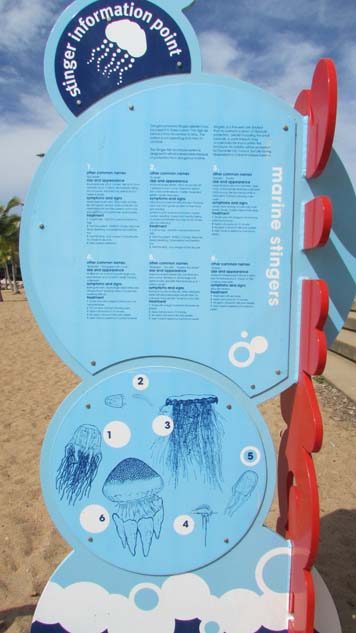 Hence, the need for this. When was the last time you saw vinegar stations at the beach? They take this stuff pretty seriously. Smart to have it out there in case you forgot to bring your own! 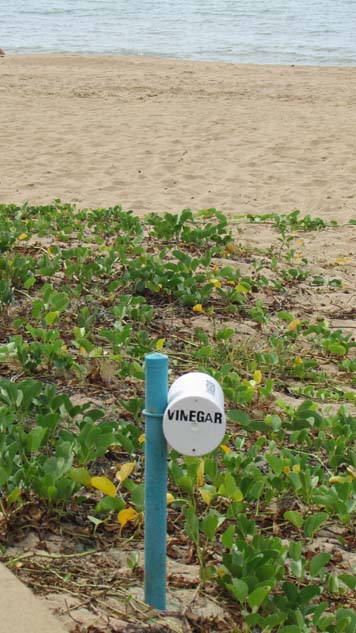 I saw quite a few American muscle cars and about had a meltdown when a beautiful black, lowered ’68 Camaro passed me by. I wiped the tears away and cheered myself up with this one. I wasn’t exactly a Valiant fan, but there’s just something cool about seeing a right hand drive with a license plate from the Outback. I caught some glimpses of an old ’65 convertible Corvette and a couple of Mustangs too. Sometimes I still can’t believe I’m in Australia, folks! 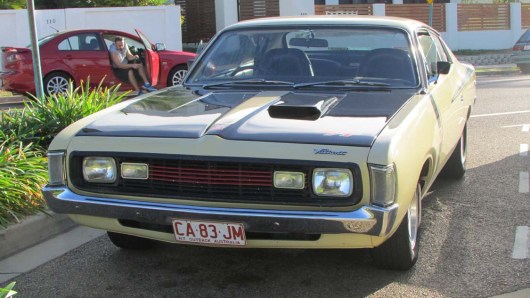 There are some really huge houses up on the hill overlooking the sea. This one in particular caught my eye due to its precarious stilts. Party on the deck at your own risk! 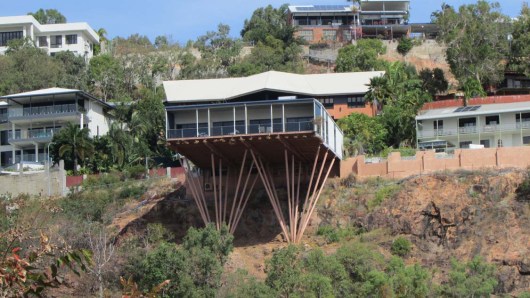 I went downtown today to check out the market and went into this art gallery where they were displaying “wearable art”. Well, you won’t be catching me in any of these (maybe the iguana bra). I swear this stuff looks like something out of a Clive Barker film. 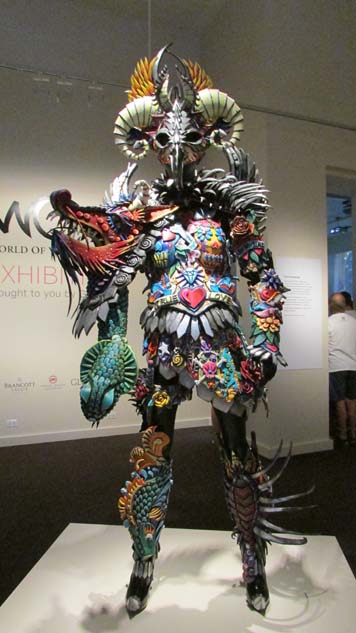 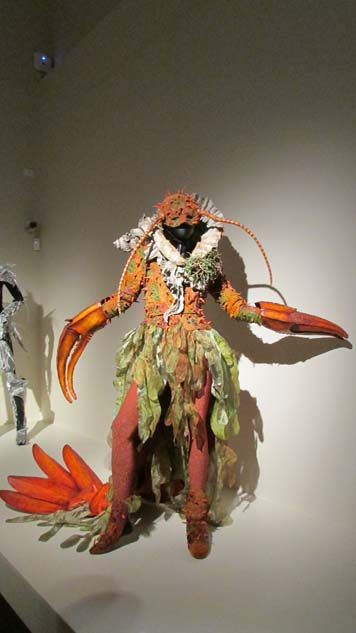 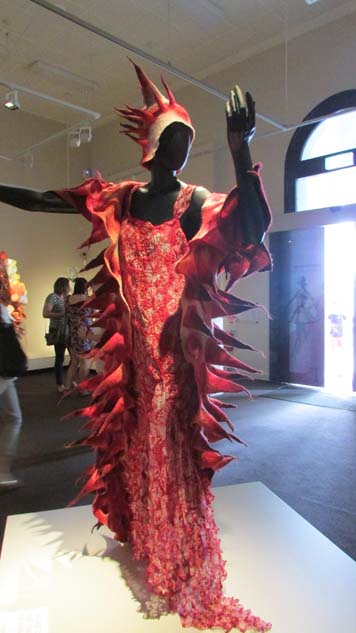 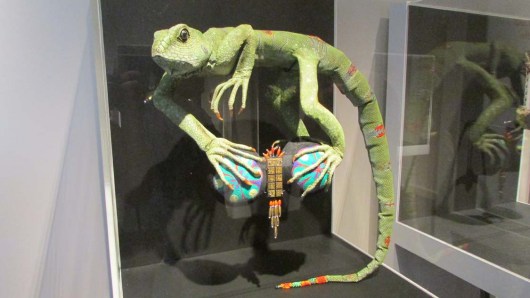 In about a week I’ll be visiting the Billabong Sanctuary where I’ll have a big surprise (hopefully)! At the very least, a lot of cool pictures of the native animals and a fun day, so check back then!

0 thoughts on “Out On the Town(sville)”