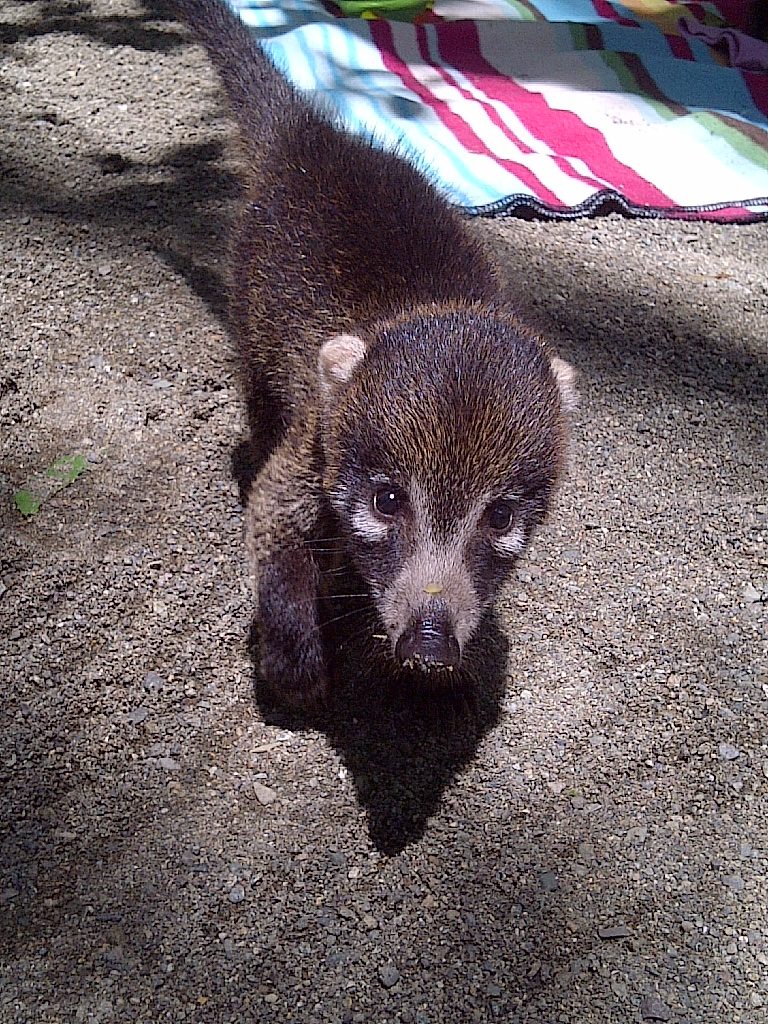 Meet Andrea, the tiny little coati that came in a few days ago.  Everyone’s voice went about 10 octaves higher when they saw her.  I don’t know how she was found, but she had been chewing on the end of her tail.  The next time I saw her she had a bright red bandage wrapped around it.  They were letting her in the sloth garden so she could socialize and encouraged everyone to play with her.

Coati’s are known by many names like the Brazilian aardvark, hog nosed coons or my personal favorite, snookum bears.  They are relatives of the racoon family and usually travel in bands of 10-30 (but only the females…males travel alone).  They are

known for their intelligence and amazing sense of smell (check out the nose on that girl!).  They keep their ringed tails high in the air which helps them locate one another in tall grass.  Heck, these guys are even found in extreme southern parts of Texas!

I jumped at the chance of manning the sloth garden the other day and sure enough, she was dropped off to me.  She quickly proceeded to eat Stanley’s banana.  When she got bored of that, she’d wander around a little bit and then I’d go pick her up to hold her for a while.  She has some mighty sharp teeth and growled and bit me when I attempted to get her.  But once she was on me, right up to the shoulders she went and snuggled in just fine.  It was a cute sight so I had to take some pictures. 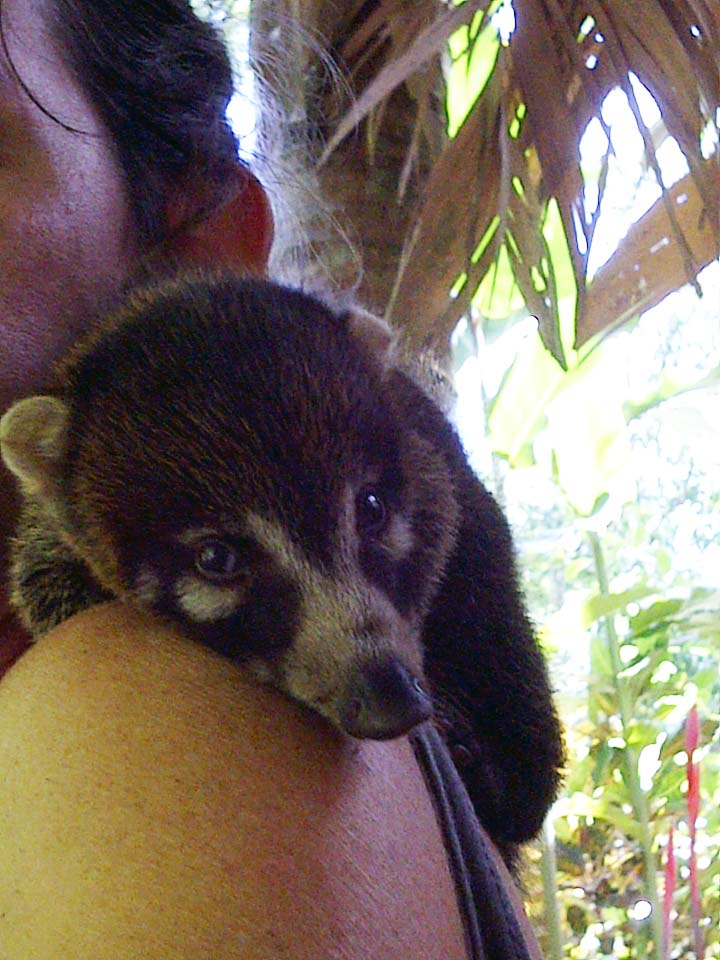 She got tuckered out pretty fast and would fall asleep on me.  I would wake her up after a bit and get her moving again.  They are not nocturnal so I didn’t feel bad about doing it.  She’d go to the corner of the garden and try to chew on her tail again, which I would stop her from doing. I know she was doing it for a reason…and I know how good it feels to scratch an itch but I didn’t want her to hurt herself either.  Someone told me they put the bandage back on at night.  Poor girl…she would scratch her little legs as she sat on her tiny butt, back up against the wall like a bear.  Another volunteer came in and told me she had mites.  Mmmmmm great, and she’s been climbing all over me.  Then she said, “well, most of the animals here have mites”.  After my encounter with chiggers in Guyana, I knew immediately that I would be going straight to the shower, throwing my clothes outside and scrubbing down well.

Regardless, she was still fun to hold and play with.  At one point, I had her on my chest and she shoved her big ‘ol nose in my throat and took a nap.  Now tell me THAT ain’t cute! 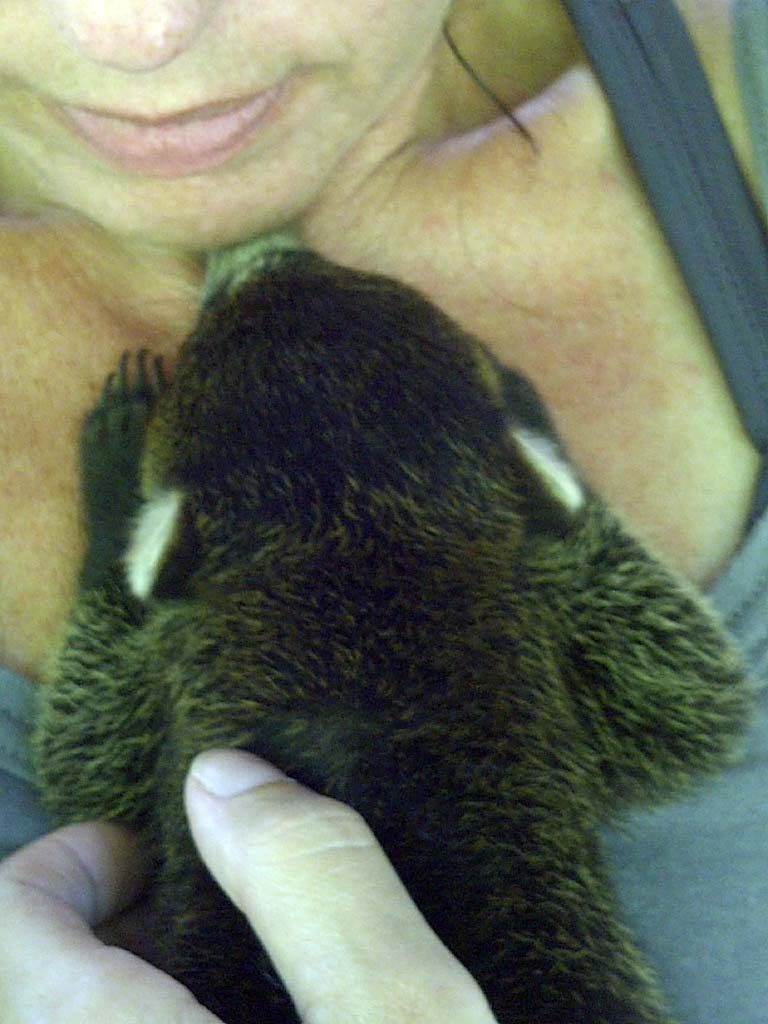 Then on the way to deliver the squirrel food I noticed this awesome skink that I’d never seen before!  Apparently he’s not new, he just hides a lot or I’m not back there that often to have seen him before.  The picture, as usual, doesn’t do his colors justice.  He was really outstanding!  Quite a handsome lad! 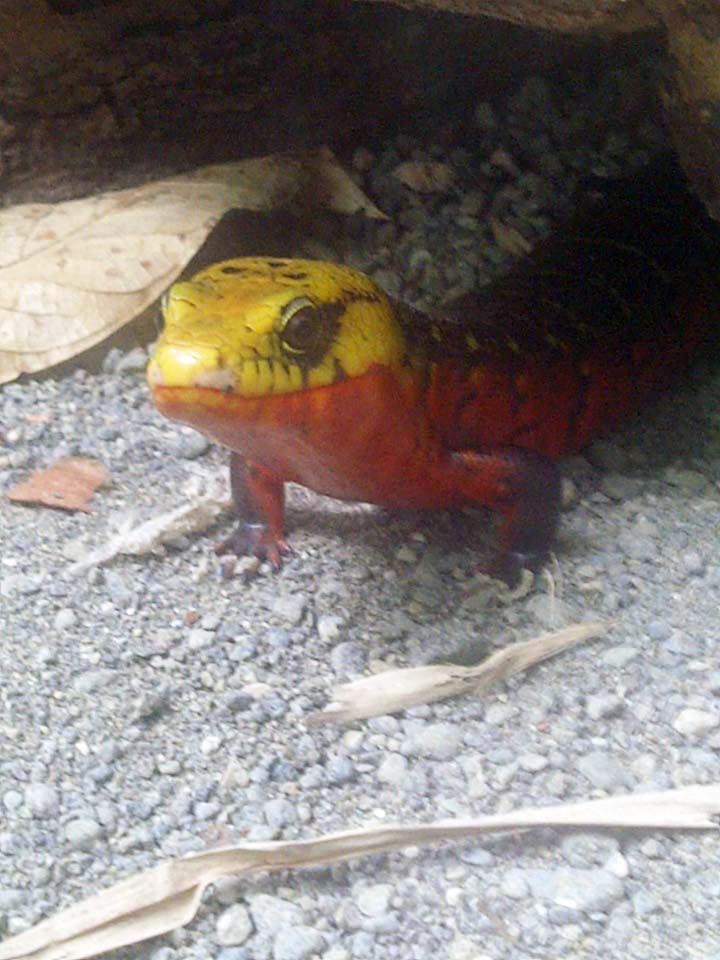 I also passed by the tree frog area which always has eggs stuck to the leaves so I took a picture.  They fall into the water below when they are ‘ready’ and then transform into tadpoles and eventually frogs. 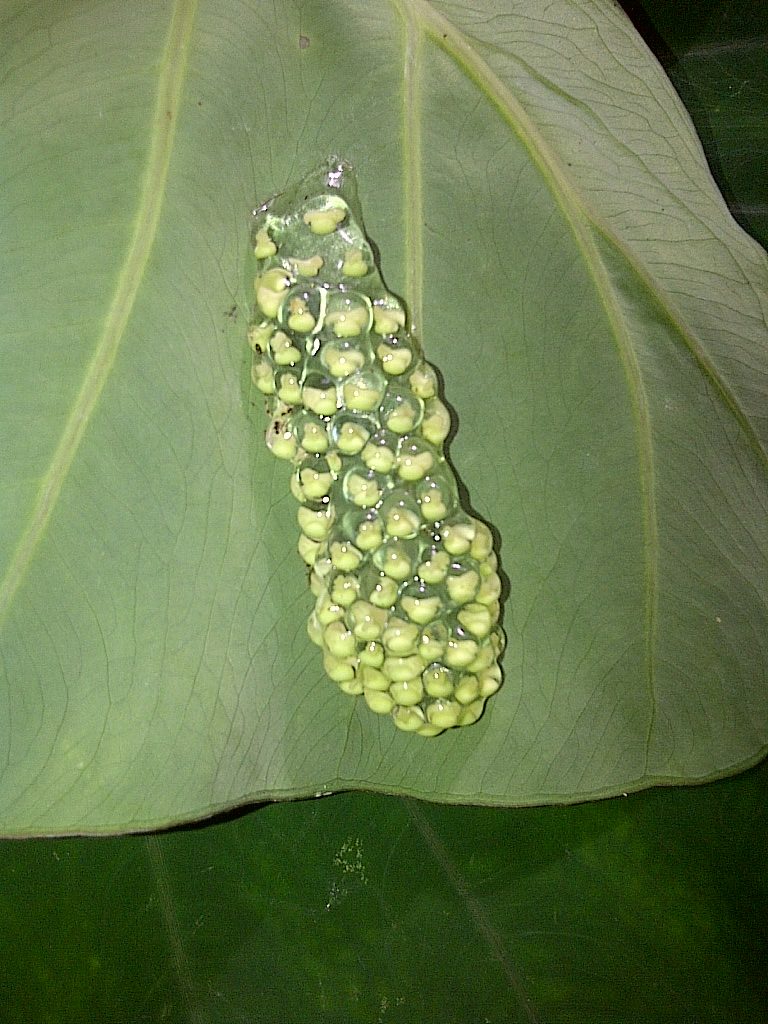 Today I went to the beach again, as I have been trying to do when I realized I won’t have it around for much longer.  Plus, I FINALLY found the perfect spot in Playa Chiquita where the water is calm and I can have my own personal bathtub to myself.  I brought along some of my $8 salami to feed the fish (they don’t know how good they have it).  As I stood there doing that, some of them thought it was a great opportunity to chew on ME instead of the salami.  Just when my friend invited me to have a fish pedicure in Virginia (which I turned down), I told her I can get one here at no charge.  Those tiny fish teeth hurt sometimes too!

Unfortunately I’m back to having a love/hate affair with this town again.  Something blew in with the cold front the other night and I have some bad allergies, along with a bunch of other folks too.  Just when I was feeling good, SOMETHING had to happen.  On top of that, the sand fleas are eating me alive tonight.  I thought to myself, “I don’t know HOW anyone can LIVE HERE!!!!!!”  Two more weeks, Steph…two more weeks.